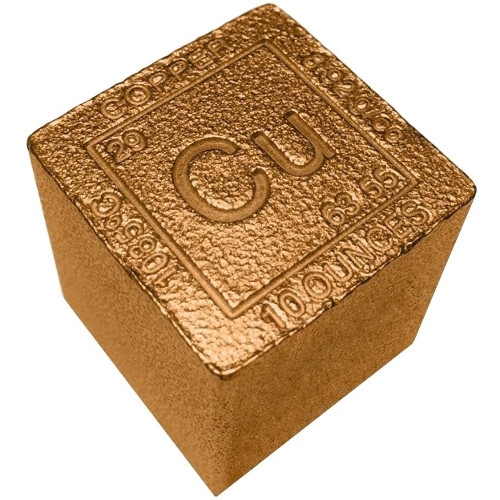 Copper is often treated differently than other precious metals, despite its status as a precious metal from a scientific standpoint. Copper is traded as a commodity and viewed as a lesser metal by investors because it is often used in numerous industrial applications, but it nonetheless holds tremendous value as an investment option. The new 10 oz Copper Bullion Cube is now available to you online at Silver.com.

Copper is one of the few metals that naturally occurs in the Earth’s crust, and was first used by early humans as far back as 8,000 BC. The first use of the metal smelted into an ore occurred three thousand years later in 5,000 BC.

Today, copper is commonly found in homes and various other industries. A soft, malleable metal with high electrical and thermal conductivity, it was popular in the use of electrical wiring and water piping. It is also an essential metal to living organisms as a trace dietary mineral with trace respiratory enzyme complexes.

These 10 oz Copper Bullion Cubes contain a total of 10 lbs. of pure copper, and make an excellent option for those looking alternatives to copper rounds and bars. Each one has a design on the top face of the cube that has been engraved with the full square and information from Copper’s place on the Periodic Table of Elements.

Included in the design is the atomic number of copper, 29, along with its standard atomic weight of 63.546, and its listing of Cu from the table. Other markings include the weight in ounces, the name “Copper,” and the melting point in Celsius of copper.

Rising copper prices in the middle of the last decade have made the rust-colored metal increasingly popular among investors. In fact, the limited supply of copper at times, combined with high prices, have pushed people to extreme lengths to acquire some copper. Countless news stories catalog the increase in thefts of copper piping, as just one example.

Silver.com encourages all customers to contact us with questions. You can reach out to us on the phone at 888-989-7223, or connect with us online using our live chat and email features.