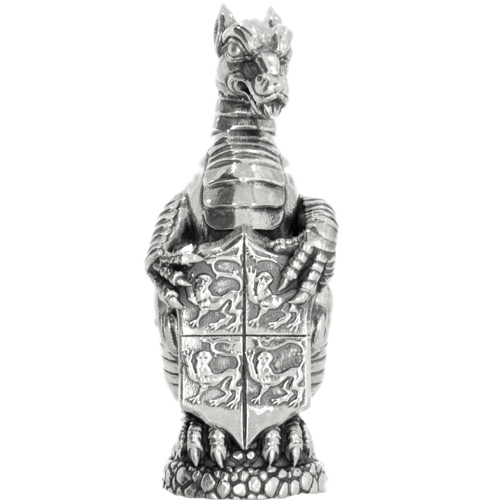 Throughout the history of the Royal Arms of England, the Lion of England has supported the official shield of the kingdom and monarch. During the reign of the Tudor monarchs from 1485 to 1603, the Red Dragon of Wales was added as a supporter of the Royal Arms, connecting Wales to the dominion of the monarchy. Right now, 10 oz Antique Finish Silver Queen’s Beast The Dragon of Wales Statues are available to purchase online at Silver.com.

Each 10 oz Antique Finish Silver Queen’s Beast The Red Dragon of Wales Statue is available to you with protective packaging materials around the statue inside of a standard shipping box. The statues have antique visuals and laser-engraved inscriptions on the base. The most important of those inscriptions is the unique serial number assigned to the statue, a number that is reflected on the numbered Certificate of Authenticity.

The Red Dragon of Wales, known also as the Welsh dragon, can trace its roots back the 7th-century reign of Cadwaladr ap Cadwallon, the king of Gwynedd in Wales from 655 to 682 CE. The Red Dragon is said to have appeared in the badge of Cadwaladr during his reign. The Welsh dragon was later officially recorded in the written record in the 9th century in Historia Brittonum.

Your 10 oz Antique Finish Silver Queen’s Beast The Red Dragon of Wales Statue depicts the Red Dragon supporting a quartered shield design with rampant lions in each of the four quadrants. The shield shown here is the Welsh coat of arms and is said to date to the life of Llywelyn ap Gruffudd. Known as Llywelyn the Last, he was the last man to hold the title Prince of Wales who was a native of Wales. He was the grandson of Llywelyn the Great and final sovereign Prince of Wales before the kingdom was conquered by King Edward I of England.

The Red Dragon was featured in the seal of Owen Tudor, a Welsh courtier who married the widow of King Henry V of England, Catherine of Valois. Owen Tudor and his grandson, the future King Henry VII of England, used the Red Dragon and its connection to Cadwaladr to establish a lineage to the English throne during the Wars of the Roses. When Henry VII defeated Richard III at the Battle of Bosworth to claim the throne, he elevated the Red Dragon of Wales to a supporting heraldic beast of the Royal Arms of England. It endured through the reign of all Tudor monarchs from Henry VII to Elizabeth I.