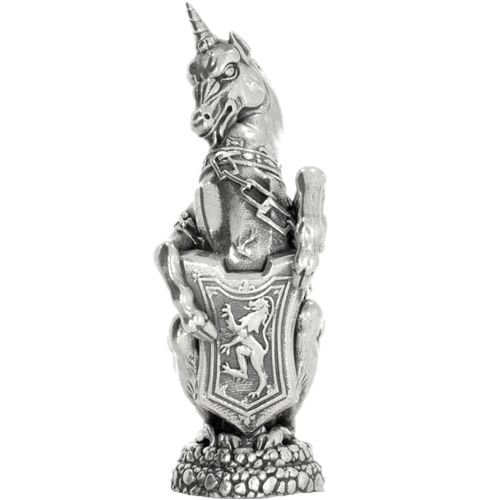 Many nations around the world have individual animals that serve as an instant symbol of national identity, such as the lion in England or the bald eagle in America, Scotland has one of the more unique mythical beasts as its official symbol. The Unicorn of Scotland holds a longstanding place in the heraldry of Scotland and is part of the Royal Arms of the United Kingdom as a symbol of Scotland’s place in the union. Now, 10 oz Antique Finish Silver Queen’s Beast The Unicorn of Scotland Statues are available to you for purchase online at Silver.com.

Unicorns may be mythical creatures, but these mythical creatures meant a lot to the ancient Celtic cultures of the British Isles. In Celtic mythology, the unicorn is representative of purity and innocence but also symbolizes masculinity and power. The earliest individuals to hold the title King of the Scots would use unicorn in badges and seals representing the monarchy of Scotland.

These 10 oz Antique Finish Silver Queen’s Beast The Unicorn of Scotland Statues depicts the powerful and awe-inspiring heraldic beast of Scotland. The Unicorn stands behind the shield with a crown harness around its neck and a chain that is broken from its anchor point that links up to the crown. The Unicorn’s front legs dangle over the shield known as the coat of arms of Scotland. This seal depicts a rampant lion and was adopted in the 12th century by the King of the Scots.

King William the Lion was the first to use a rampant lion similar to this design, though there is no trace of an official seal that remains in the historical record. His son, Alexander II, did clearly use a rampant lion in his seal and is often officially credited with bringing it to the Royal Arms of Scotland.

These 10 oz Antique Finish Silver Queen’s Beast The Unicorn of Scotland Statues are available brand new with protective packaging inside a shipping box. The statues come with antique visuals, laser-engraved serial numbers on the base, and a Certificate of Authenticity with matching serial numbers.

Silver.com customer service is available to assist you with questions about silver for sale on the phone at 888-989-7223. We are also available on the web using our live chat and email address features.