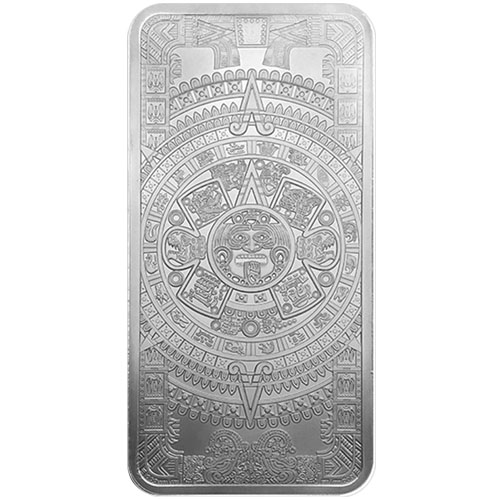 The Aztec sun stone is a massive basalt rock that was used by the Aztec Empire to create a calendar system and depiction of the formation of the cosmos. Though some believe it was carved as early as 1250, most scientific dating of the rock narrows the timeframe down to 1502-1520. The actual stone now resides in the National Anthropology Museum in Mexico City, but you have your very own version with a new silver bar for sale. Today, 10 oz Silver Aztec Calendar Bars are available to you online at Silver.com.

There’s no better way to own your own version of the Aztec sun stone than purchasing one of these 10 oz silver bars. The actual stone upon which the Aztec Calendar designs were etched is 39 inches thick and weighs in at 24 short tons. The stone was carved during the fall of the Aztec Empire and buried for more than 270 years before being rediscovered.

All of these 10 oz Silver Aztec Calendar Bars are available to you today for purchase in brand-new condition. The bars are offered individually inside of protective flips or you can purchase multiples of 10 inside of tubes.

The obverse side of the 10 oz Silver Aztec Calendar Bar includes various design elements arranged around a central disk. That center disk has a frightening depiction of the Aztec solar deity, Tonatiuh. Each of his clawed hands holds a human heart and his tongue is a stone dagger similar to those used in ancient Aztec sacrifice rituals. There are three primary rings of designs around this central disk. The first ring depicts symbols for the 20 days in each of the 18 months on the Aztec solar calendar. The outermost ring features two flaming serpents.

As the Aztec Empire was crumbling under the pressure of diseases brought to their shores by invading Spanish conquistadors and succumbing to the advanced weaponry of European armies, the Aztec sun stone was buried in the capital city of Tenochtitlan around 1521. Workers repairing the Mexico City Cathedral, situated at the center of what was once Tenochtitlan, discovered the stone in December 1790.

On the reverse face of the 10 oz Silver Aztec Calendar Bar is a depiction of the last great Emperor of the Aztec Empire. Cuauhtemoc was elected emperor in 1520 and tried to lead his people to victory over the Spanish. He was eventually captured as Tenochtitlan fell, held in captivity for years by the Spanish, and later executed. He is revered to this day by the Mexican people.

Please feel free to reach out to us with questions about these silver bars. You can call us at 888-989-7223, chat with us live online, or send us an email.