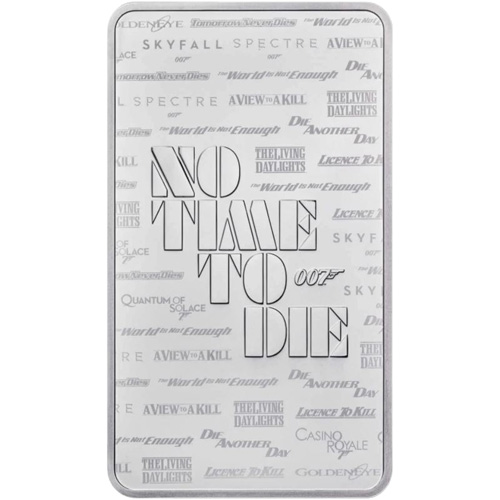 One of the most famous action-film characters of the last 60 years is James Bond. The highly-trained British secret agent is known for his suave demeanor and charisma around women and his combat skills and unique gadgets that help him defeat any enemy. In 2020, James Bond comes to the big screen once again with Daniel Craig again portraying the British spy in the 25th film in the franchise. Right now, 10 oz Silver British James Bond No Time To Die Bars are available to purchase online at Silver.com.

Each of the 10 oz Silver British James Bond No Time To Die Bars in this product listing at Silver.com comes with a sealed protective sleeve and is available in brand-new condition from the Royal Mint of England.

Ian Fleming concocted the idea of a British secret agent working on the most classified cases to defend democracy and freedom in the Western world. Code-named 007, James Bond was sent on the most important missions for the United Kingdom. His adventures first captivated reading audiences when Fleming released his first novel in 1953. Bond came to the big screen in 1962 for the first time and viewers have been able to follow the actions of Bond on the big screen through the course of 26 different movies in all, with 24 of those from Eon Productions and two films from other production houses. When No Time To Die releases in 2020, it will be the 27th film overall and the 25th film from Eon Productions, the cinema house with the official rights to the franchise.

On the obverse side of 10 oz Silver British James Bond No Time To Die Bars is a depiction of the 007 emblem in the center with the Royal Mint logo at the top. At the bottom of the bar are markings of the weight, purity, and metal content of the bar. All of the bars in the British No Time To Die bullion bar release have varying frosted and polished surfaces for visual brilliance.

The reverse face of the 10 oz Silver No Time To Die Bar includes large, block letters of the upcoming feature film name. The words “NO TIME TO DIE” appear in large text at the center of the design field, with the 007 logo included and the background field consisting of various different film names from the franchise.

If you have questions, Silver.com has the answers. Please call us at 888-989-7223, chat with us live online, or email us directly.