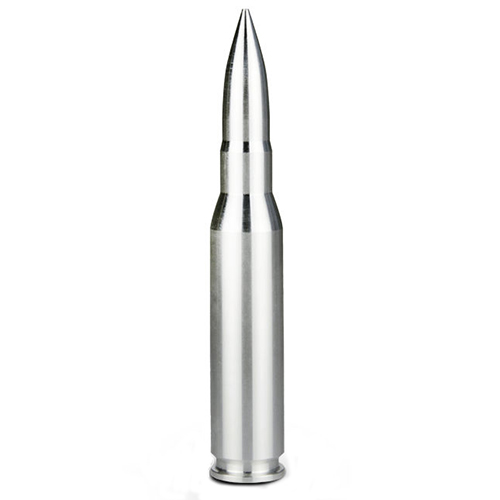 Machine guns are a powerful force that came of age with devastating effect on the battlefields of World War I. Feeling their arms were underwhelming, the United States Military improved upon its heavy machine guns of World War I with the new M2 Browning machine gun firing 50 caliber rounds. Today, 10 oz Silver Bullet 50 Caliber products are available to you online at Silver.com.

During World War I, heavy machine guns were used to mow down waves of incoming troops during trench warfare. Lessons were learned as a result of the mass casualties and nations began to adopt heavy machine guns with greater standoff range and greater firepower. The M2 Browning machine gun from famed American gun designer John Browning was the first 50-caliber machine gun in the United States Military arsenal and debuted in 1933.

The 10 oz Silver Bullet 50 Caliber product available here today reflects the same size and shape of a real-life 50 caliber round, even though these bullets are not capable of firing. The rounds accurately imitate the 50 caliber round Browning designed to go with his M2 Browning machine gun. The M2 BMG replaced the M1919 Browning machine gun firing .30-06 caliber rounds and has continued in service with the United States Military from World War II to the present day.

On the bottom of 10 oz Silver Bullets, you’ll find small engravings from the mint at SilverTowne. Here you’ll notice the weight, purity, and metal content of the silver bullet as “10 oz,” “999,” and “AG.” Each round also has a marking the SilverTowne pick ax near the primer.

SilverTowne is a small private mint in Winchester, Indiana. It was initially opened as a small coin shop in 1947 and is today one of the nation’s largest private minting operations.

Please don’t hesitate to reach out to Silver.com with your questions. You can call us at 888-989-7223, chat with us live online, or simply send us an email with your inquiries about silver for sale.