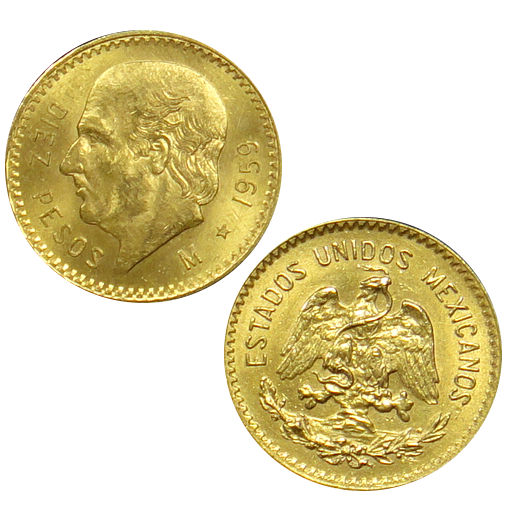 Mexico celebrated the centennial of its independence from Spain in various ways. Between 1910 and 1921, the nation celebrated its freedom in a number of ways from constructing monuments to introducing new coin series. Among the more memorable to investors was the production of the 10 Peso Gold Mexican Coin. Starting in 1921, the Mexican Mint produced commemorative peso coins with various images from its bloody War of Independence against Spain. Today, you can own a 10 Peso Gold Mexican Coin from the minting year of our choice in varied condition.

The first gold Mexican coins were minted in 1921 to mark 100 years since the end of the War of Independence. Coins were produced in 50.00, 20.00, 10.00, 5.00, 2.50, and 2.00 peso amounts by the Mexican Mint, with some of the coins bearing different designs and imagery related to the fight for independence. The 10 Peso Gold Mexican Coin features an image of Miguel Hidalgo on the reverse side, while the obverse side has the standard image of the Mexican coat of arms.

On the obverse side of the 10 Peso Gold Mexican coin is the simple left-profile image of Miguel Hidalgo. He is considered the “Father of the Nation” for his open defiance of Spanish rule. This act cost him his life in the early days of the War. Hidalgo’s image is surrounded by engravings listing the face value and year of minting on the coin.

The reverse side of the coin displays the Mexican coat of arms, which consists of an eagle perched atop a cactus with a serpent in its beak. Similar to the 50 and 5 peso coins, the eagle on this coat of arms is featured facing forward in a French design style that dates to the late 1800s.

The Mexican Mint was established in 1535 by the conquering Spanish armies in Mexico. Today, the Mexican Mint is still operating as the national mint of Mexico. It is not only the oldest mint in North America, but it is also one of the oldest in the world.

At Silver.com customer satisfaction is our first priority. If you have questions about these 10 Peso Gold Mexican Coins, other Silver.com products, or our purchasing process, we invite you to pick up the phone and call our associates at 888-989-7223. You can also speak with us through the live web chat function.