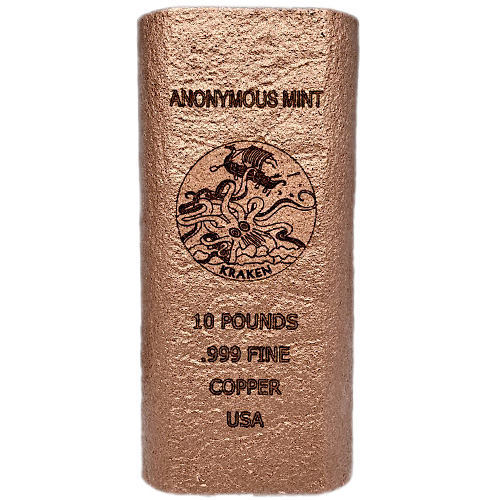 One of the most fearsome creatures in the minds of ancient sailors and mariners was the Kraken. This mythical beast was said to be a massive cephalopod who roamed the deepest reaches of the ocean. Tales of its attacks on ships often focused on those ships that dared enter its territorial waters. Attacks often took place with little to no warning. Today, 10 Pound Copper Kraken Cast Bars are available to you online at Silver.com.

The origins of the Kraken are open to some interpretation. The existence of this beast has been associated, in the modern era at least, with cultures as far back as the ancient Greeks and Romans and as recently as the height of piracy in the Caribbean. One of the first written records of a beast known as the Kraken comes from Norse culture and emerged in the Middle Ages.

All of these 10 Pound Copper Kraken Cast Bars are available to you with individual packaging. The bars don’t come with any special or presentation packaging, but each bar will be individually packaged in a plastic bag or with protective bubble wrap. These bars are cast copper bars and boast designs on just one side of the specimen.

On the obverse of 10 Pound Copper Kraken Cast Bars is a depiction of the Anonymous Mint’s Kraken design. First used on collections of silver and copper rounds, the Kraken is shown here as it emerges from the water and captures a Viking ship. The small, wooden vessel stands little chance against the might of the Kraken as its long, powerful tentacles have engulfed the ship and raised it up from the water. Rather through fear or force, several sailors have gone overboard and are falling toward the water. The reverse of these Copper Kraken Cast Bars is blank.