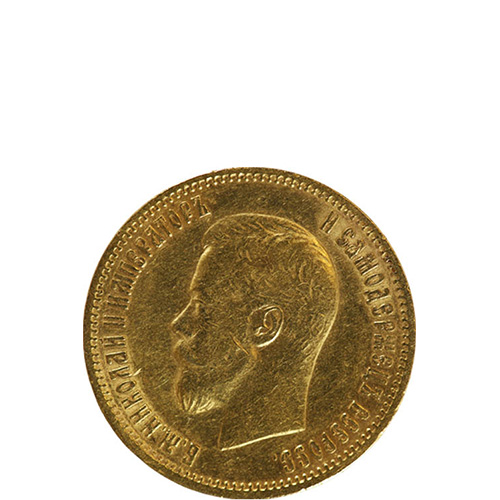 The coins of the Russian rouble are still produced today by the Russian Federation, but there are various examples of historic versions of the currency that are attractive to those buying gold. Like many nations around the world, Russia has long abandoned the production of gold coins for use in circulation. Among the last specimens released were those of the late-19th and early-20th century Russian Empire. Today, Gold 10 Rouble Coins from Imperial Russia are available to you online at Silver.com.

The first issuance of Roubles in what is now Russia came in the 14th century. Over the course of time, Roubles were issued in various forms by kingdoms within Russia, by the Russian Empire, and even during the era of Soviet Russia. Today, the Rouble remains the official currency of Russia, though it is no longer issued in the form of gold coins as it once was in the early 20th century.

All of these Gold 10 Rouble Coins are Imperial Russia issues from the late 19th and early 20th centuries. The coins were struck between 1898 and 1911 as Tsar Nicholas II was on the throne as the Emperor of Russia. The coins have 90% gold content and are offered here with individual plastic flips. These coins come in circulated condition with common signs of wear and tear from handling present on the specimens.

Silver.com offers these coins to you at random. We are not able to guarantee the condition or date mark of a specific coin in advance. All items are chosen at random after your payment is processed, which means you may receive matching dates and conditions on the coins you receive when you buy multiples.

On the obverse of Gold 10 Rouble Coins is a left-profile portrait of Tsar Nicholas II. He was the final Emperor to feature on Gold Roubles as the coins were suspended in 1911 and his family was violently removed from power in Russia during the Soviet Revolution in 1917.

The reverse side of Gold 10 Roubles features the Imperial Coat of Arms of Russia. The Empire went through various forms of this seal, with the version depicted here adopted in 1883. It depicts a double-headed eagle, with each head individually crowned and an imperial crown topping the two heads. The bird clutches an imperial scepter and imperial orb in its talons, with a shield at the center of the design reflecting St. George as he slays a dragon.

Please contact Silver.com with any questions. Our team can assist you at 888-989-7223, online through our live chat, and via our email address.