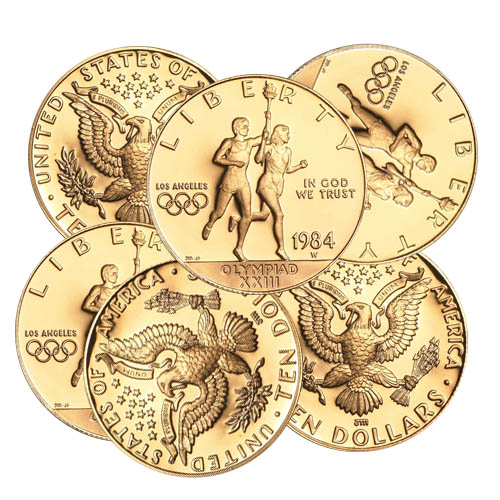 Any quantity available for $39.99 per coin over spot!

In 1982, the United States Mint reintroduced commemorative coins after almost 30 years without the striking of such a coin. Such coinage has a unique production history in America, with the first-ever commemorative coins struck in 1892 and halted in 1954, before returning to the US Mint catalog in 1982. The $10 Gold US Mint Commemorative Coin is currently available to you for purchase online at Silver.com.

$10 Gold US Mint Commemorative Coins were issued first in 1984 to celebrate the Summer Olympic Games hosted by the city of Los Angeles in California. The design featured on the obverse includes two Olympic runners holding a torch. These particular coins had an authorized mintage of 2 million, with all four US Mint facilities coining the proof version of the gold coin.

On the reverse of these particular $10 Gold US Mint Commemorative Coins is the image of the American bald eagle inspired by the Great Seal of the United States. It includes a bald eagle with the ribbon reading “E Pluribus Unum” and a constellation of 13 stars in a triangle above its head. Engravings highlight the face value and nation of issue.

Other $10 Gold US Mint Commemorative Coins issued by the US Mint include one honoring the First Flight Centennial. The portraits of Orville and Wilbur Wright appear on these coins and the American bald eagle flies over the 1903 flyer created by the brothers.

All $10 Gold US Mint Commemorative Coins in this listing are available in either the BU, uncirculated version of the coin or the proof version. The proof coins arrive in original US Mint packaging or inside of plastic flips.