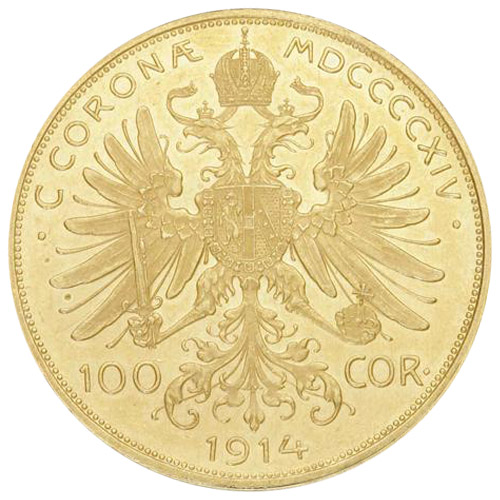 When you’re hunting down gold coins for sale online, there’s nothing better than getting your hands on historic currency in outstanding condition. Former circulation currency once held status as legal tender for commercial debts, but today hold even greater value for their metal content, beautiful designs, and impressive condition. Today, the 100 Corona Gold Austria Coin is available to you online at Silver.com.

To celebrate the 60th anniversary of the reign of Franz Josef I, the Austrian Emperor and King of Hungary during the rule of the Austro-Hungarian Empire, the Austrian Mint produced the 100 Corona Gold Austria Coin. These coins were only available from 1908 to 1914, with the restrike versions struck with a date of 1915.

Austria underwent a redesign of its currency starting in 1892, with the first denominations issued in much lower face values. At this time in Austrian history, the empire’s currency was known as the Crown, or Corona. The first coins issued had face values of 10 and 20 Corona, with the 100 Corona coin released only during the aforementioned time frame to celebrate Franz Josef I’s diamond jubilee.

All 100 Corona Austria Gold Coins in this product listing are available to you in About Uncirculated Plus, or AU+ condition. Coins in this condition have sharp legends, devices that show only a hint of wear and tear on the high points, and at least half of its original mint luster still remaining.

Silver.com cannot guarantee the year of issue on the coin receive, as this will be determined when your coin is processed for shipping at our warehouse.

On the obverse of the Corona Austria Gold Coins you’ll find a right-profile portrait of the Austrian Emperor and King of Hungary, Franz Josef I. The reverse of the coins includes the regal depiction of the coat of arms for the Austrian Empire, along with a background image of the double-headed eagle of Austria.

The Austrian Mint was first opened in 12th century during the reign of Duke Leopold V who received 15 tonnes of silver from Richard the Lionheart of England on his way back from the crusades. Today, the mint is the official sovereign mint of Austria and produces Euros for the economic bloc known as the European Union.

Please don’t hesitate to reach out to Silver.com with questions. Our associates are available at 888-989-7223, on the web using our live chat service, and via our email address.