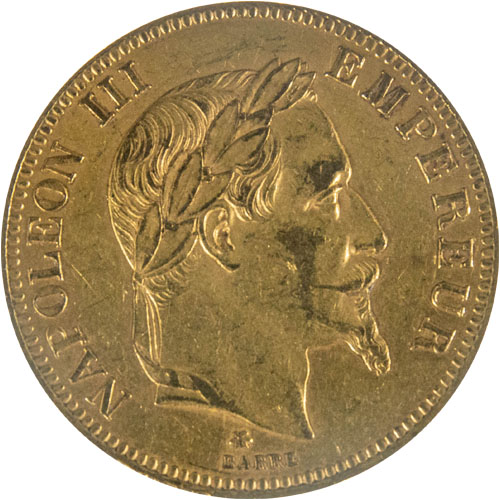 Napoleon III was one of the most famous rulers of 19th century France. Overshadowed by his uncle, Napoleon Bonaparte, Napoleon III first came to power as the President of France during the Second Republic. However, he would go on to spend most of his time in power as the Emperor of the Second French Empire. Today, 100 Francs Gold France Coins from the era of Napoleon III are available to you online from Silver.com.

Napoleon III came to power in France in 1848 having been elected the first-ever President of France under the title Louis-Napoleon Bonaparte. He would serve as President of France until 1851 when he was constitutionally blocked from reelection. Rather than give up power, he staged a coup, bringing an end to the Republic and launching the Second French Empire. He would then rule as Emperor Napoleon III from 1852 to 1870 when he was captured by the Prussians during the disastrous Franco-Prussian War.

All of these 100 Francs Gold France Coins from Napoleon III’s reign are available to you for purchase in Almost Uncirculated condition. Coins in this condition tend to showcase medium or near-full luster, and come with either extremely light or trace friction on the highest relief points. Each coin is available with a plastic flip for delivery.

Please keep in mind that Silver.com selects your coins at random after your payment has cleared. We cannot guarantee a specific date or design in advance. If you buy more than one, you could get coins with matching dates and designs.

The reverse side of the 100 Francs Gold France Coins comes with the same design throughout the series. The Imperial Coat of Arms of the Second French Empire features on the reverse of the coins.

Please contact Silver.com with any questions when you buy gold. You can call us at 888-989-7223, chat with us live online, or email us directly.