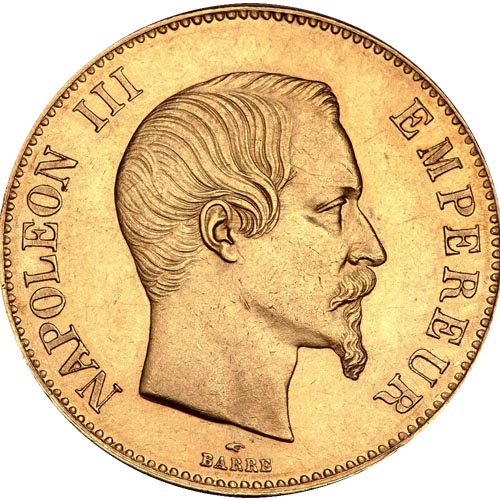 The French Franc was the national currency of France from the days of French Empires to the dawn of the modern French Republic. The nation issued Francs in various denominations and metals, but the Franc gold coin was a popular issue in the 19th century and formed the backbone of the Latin Monetary Union. The 100 Francs Gold Coin from Napoleon III’s reign is currently available to you online for purchase at Silver.com.

Once President of France, and remembered more as Emperor of France, Napoleon III was the nephew of Napoleon Bonaparte. He was the first man elected democratically in a majority vote as the President of France. The first French Republic came with his election in 1848 and his term ran through 1852. At the end of his term, not wanting to relinquish power, Napoleon III led a coup and brought about the Second French Empire with him at the helm as Emperor of France.

The 100 Francs Gold Coins in this listing come from the issue years of 1855 to 1859 during the early era of the Second French Empire. The coins were often struck by various French mints during this era, including sites in Paris, Strasbourg, Bordeaux, Marseille, Nantes, Mets, Genoa, Bayonne, Lille, Toulouse, Lyon, and Orleans.

On the obverse of these 100 Francs Gold Coins is the right-profile portrait of Napoleon III. His bust includes his signature goatee with a long beard from his chin. Engravings are in French and identify his title as “Empereur Napoleon III,” or “Emperor Napoleon III” in English.

The reverse of the coins listed here have one of two possible designs. Some feature a laurel wreath encompassing the face value of “100 Francs” and a date mark in the center. Other 100 Francs Gold Coins have the French coat of arms dominant in the center of the design field, with “100” and “FR” on either side and the date mark below the seal.

We encourage Silver.com customers to reach out to us with questions. You can call us at 888-989-7223, chat with us live online, or simply send us an email with your inquiries.