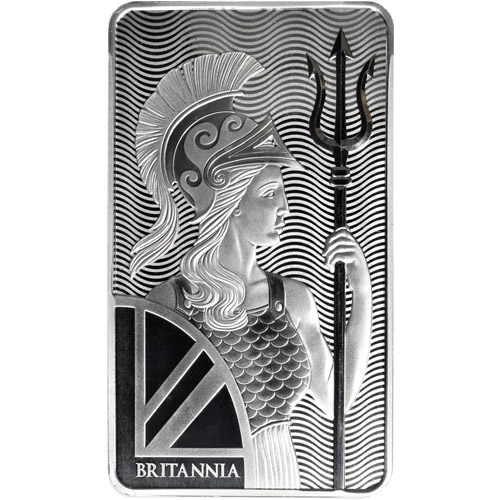 Any quantity available for $4.59 per oz over spot!

Britannia is one of the most important images in the history of Britain. The concept of Britannia emerged during the Roman occupation of Britain and became the name of the new province during Roman control of the Isles. Some 350 years ago, Britannia first appeared on British coinage. Right now, 100 oz Silver British Britannia Bars are available to purchase online at Silver.com.

Each of the 100 oz Silver British Britannia Bars available to you in this Silver.com listing represents the first-ever use of her image on silver bullion bars from the Royal Mint. The bars are individually packaged and can be purchased here as single pieces in that packaging, or in bulk orders with five individually packaged bars housed inside of a master box with a total of 500 Troy ounces of silver.

Britannia’s first use on British coinage came 350 years ago as the crowns of England and Scotland were merged and the nations drew closer together as the United Kingdom. Britannia was a symbol of power and popularly used on coinage of the era. More recently, she has featured on the Gold Britannia and Silver Britannia coins from the Royal Mint.

On the obverse face of 100 oz Silver British Britannia Bars is a new design of Britannia. This beautiful vision of the nation’s personification is featured in right-profile relief with a Corinthian helmet, trident in one hand, and a shield in her right hand. The trident represents her power to control the seas and protect the nation, while the shield has the Union Jack flag of Britain.

The reverse side of 100 oz Silver Britannia Bars includes various important markers. The Royal Mint of England’s logo is at the top of the bar followed by “100 oz 999 Fine Silver.” Both sides of the bar have waving lines in the background, and at the bottom of the reverse side, you’ll find the waves of the sea as they crash toward the British coastline.

The Royal Mint of England is Europe’s oldest operating mint. Though Roman minting took place, the Royal Mint traces its roots to the London Mint formed in 886 following Alfred the Great’s capture of London from Danelaw.