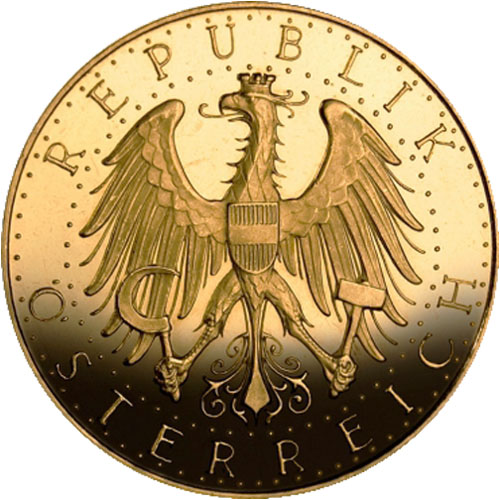 Some of the most popular gold coins for sale today are those which were originally intended for circulation. Historic gold coins offer lower premiums than modern bullion coins and have added inherent value as a result of their historic standing, classic designs, and limited availability. Right now, Gold 100 Schilling Austrian Coins are available to purchase online at Silver.com.

Each of the Gold 100 Schilling Austrian Coins in this product listing from Silver.com is available to you inside of protective plastic packaging. These coins were only available from the Austrian Mint between 1926 and 1938, with most of the coins struck in a proof-like condition and rarely used in circulation.

Following the breakup of the Austro-Hungarian Empire after World War I, the new Republic of Austria set about introducing its own currency. The result of the Schilling Act of December 1924 was a new national currency for the Republic of Austria. Schilling coinage was put into production that same year and regularly coined by the Austrian Mint through 1999, with coins accepted in circulation through 2002 when the Euro was completely phased into circulation.

From 1926 to 1938, the Schilling was the official coinage of Austria. World War II and Nazi occupation resulted in the Reichsmark taking over from 1938 to 1945, but the Schilling returned in 1945 following the war and Nazi Germany’s defeat. Among the denominations that didn’t return though was the Gold 100 Schilling Austrian coin.

On the reverse of Gold 100 Schilling Austrian Coins is one of two possible versions of the coat of arms for the Republic of Austria. Coins issued in this denomination from 1926 to 1934 feature the coat of arms of the First Republic (1919 to 1934) and depicted a crowned, single-headed eagle behind the national shield. The coins issued from 1934 to 1936 bear the two-headed eagle of the Federal State, a design similar to the Austro-Hungarian Empire coat of arms.

If you have any questions, please contact Silver.com. Our customer service team is available to you on the phone at 888-989-7223, online using our live chat, and via our email address.