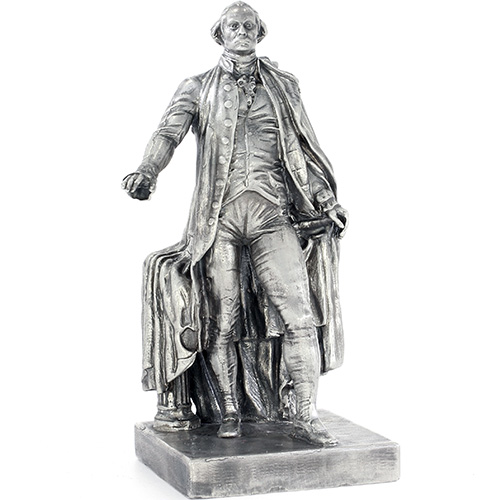 George Washington is affectionately known as the Founding Father of America. He served as a colonial militia leader for the British Army during the French-Indian War, led the Continental Army decades later in the American Revolution, and served as the first President of the United States. The 11 oz Antique Finish Silver George Washington Statue captures the stature of the man himself and is available to you online today at Silver.com.

As a leader of the American cause for independence, Washington seemingly did it all. On the battlefield he led the Continental Army, vastly outnumbered and outclassed by the British Army, to a stunning victory that led to American victory in the Revolutionary War. As a statesman and politician, he cobbled together the collective will to form a new country from 13 very different colonies.

He presided over the 1787 convention that resulted in the drafting of the United States Constitution. In 1789, he was elected as the first President of the United States, serving two terms and voluntarily stepping aside afterward. After leaving office, his predecessor John Adams named him the Commanding General of the United States Army, a position he held until his death in December 1799.

The 11 oz Antique Finish Silver George Washington Statue captures the larger-than-life persona of a young Washington in full-figure. He is shown standing in front of a pedestal, with a long overcoat over his shoulders that flows down behind him and covers the pedestal. His left hand props him up as he leans against that pedestal, and his right hand is outstretched in front of him as if gesturing during a speech.

All silver statues available from HotCo have the company’s proprietary antique polish applied to the product, which lends an added layer of detail to the intricate design of each piece. Your 11 oz Antique Finish Silver George Washington Statue ships inside of a box for protection, and has a Certificate of Authenticity that matches the individual serial number laser-etched on the base of the statue.

HotCo has a wide variety of silver statues available to those who value unique silver collectibles. In addition to this George Washington statue, there are countless other Americana themed release, the Lost World Collection, and the Coins of the World.

You can check out all the silver for sale online at Silver.com. You can also reach our customer service team with questions at 888-989-7223, chat with us live online, or send us an email with your inquiries.