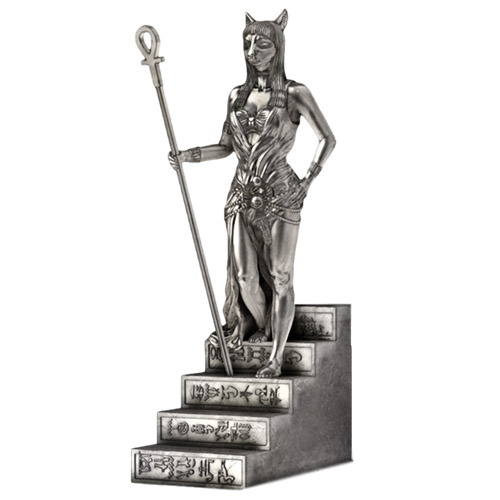 The Gods of Ancient Egypt Series from HotCo is an exciting collection of silver statues representing different gods from the various eras and dynasties of Egypt. Each one captures a different god or goddess from Ancient Egyptian religions. Bastet is the latest to feature in the collection and brings a beautiful design of a goddess descending a staircase. Today, 11 oz Antique Finish Silver Bastet Statues are available to you online at Silver.com.

Bastet was first worshipped during the Second Dynasty of Ancient Egypt around the year 2890 BCE. She was simultaneously worshipped in Lower Egypt as a lioness goddess. She was initially considered a lioness warrior and worshipped as such, but by the time Ancient Egypt’s capital moved to Thebes during the Eighteenth Dynasty, Bastet had been diminished in stature to a lesser goddess.

All 11 oz Antique Finish Silver Bastet Statues are available with an antique polish applied to the finished product. The antique polish gives each statue the appearance of an Ancient Egyptian relic and makes for a perfect heirloom-quality silver piece. The statues have an individual serial number and purity (.925) laser-etched onto the base of the product. The statues are shipped inside of protective boxes and come with a numbered Certificate of Authenticity.

The design of the 11 oz Antique Finish Silver Bastet Statue depicts the Goddess of Protection in her common form as a female with the head of a cat. Originally depicted with the head of a lioness due to her status as a warrior goddess, she was demoted to a lesser role with a new depiction featuring the head of a domestic cat.

However, the demotion was in prominence only. Ancient Egyptians revered cats for their ability to combat vermin like mice and rats. Though this might seem silly, vermin were a threat to vital food supplies in Ancient Egypt and the role of cats in combating these pests earned them high praise.

HotCo, or Heads or Tales Coins & Collectibles, was founded in 2008. The company focuses on craftsmanship and attention to detail. Silver statues are among its primary offerings for silver buyers.