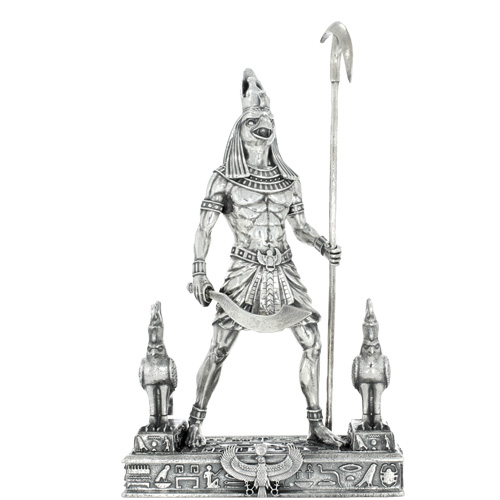 Horus is one of the most relevant and revered deities from Ancient Egypt. His status was such that he was considered the national god and the god of kingship. Horus was closely associated with every pharaoh to rule from the prehistoric era of Ancient Egypt through the Ptolemaic and Roman periods. Now, 12 oz Antique Finish Silver Horus Statues are available to you for purchase online at Silver.com.

Horus is more than just a national god in Egypt, he is the first known national god from the earliest records available from Ancient Egypt. He is specifically related to the ruling pharaohs, who were considered a living manifestation of Horus in the flesh and later depicted as Osiris in death.

As with all other Egyptian deities, there were many ways of depicting Horus in hieroglyphs and art. He is most often depicted with the body of a man and the head of a falcon. When it came to simpler hieroglyphs, a falcon was used to refer to Horus. Among the common elements depicted along with his figure is a pschent, a red and white crown that symbolizes kingship over the entirety of the kingdom of Egypt.

Your 12 oz Antique Finish Silver Horus Statue comes with a depiction of Horus standing on a mantle. The mantle base for the statue has hieroglyphs along its edge with a large falcon symbol on the front-facing side of the mantle. The mantle itself has guardian falcons on either side of the figure of Horus. The god of kingship is shown in the center as a muscular male figure with the popular falcon head. He wears a large, prominent pschent on his head to symbolize his rule of the kings of Egypt while wielding a long scepter in his left hand and an Egyptian battle sword in his right.

These 12 oz Antique Finish Silver Horus Statues are available to you with protective wrapping materials around the product and a shipping box for delivery. Each statue comes with an antique polish that highlights the intricate layers of detail in the design. The base of the statue has laser-etched inscriptions of the purity, weight, and serial number. You will find that same serial number on the numbered Certificate of Authenticity available with your purchase.

Silver.com customer service is available to assist you with questions about silver for sale at 888-989-7223. Alternatively, you can connect to us online through our live chat and email features.