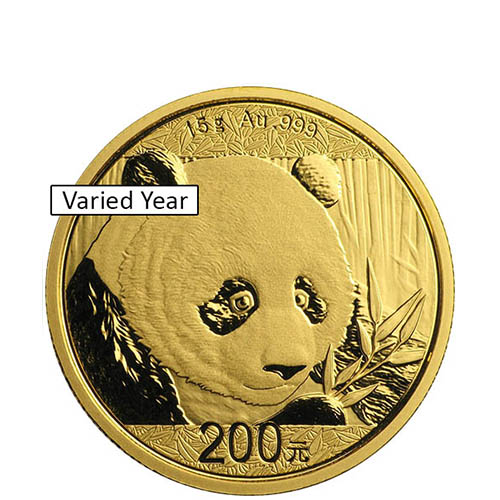 Gold Chinese Panda coins are one of the few gold bullion coins released each year with a new design on the reverse side. While the motif always remains focused on the unofficial symbol of the People’s Republic of China, the Giant Panda depiction is altered each year for a fresh look. Today, 15 Gram Gold Chinese Panda Coins are available to you online at Silver.com.

Gold Panda coins debuted in 1982 with four options to choose from when buying. In addition to a 1 oz gold coin, there was a ½ oz, ¼ oz, and 1/10 oz option. The 1983 release year saw the addition of a diminutive 1/20 oz coin to the collection. From 1983 to 2015 nothing changed about this lineup of coins in terms of offerings.

In 2016, the Chinese Mint made a bold change to replace the use of Troy ounces in the series with Grams. The move was meant to bring the collection in line with the nation’s use of the Metric system. That change meant that the previously issued ½ oz Gold Panda was no longer available with that measurement unit. These 15 Gram Gold Chinese Panda Coins replaced the former ½ oz coin in the series, which now features a 30 Gram, 8 Gram, 3 Gram, and 1 Gram coin in addition to these Gold Pandas.

On the reverse of all 15 Gram Gold Chinese Panda Coins is the image of a Giant Panda. This native species of bears are easily identified by the black patches of fur around the eye and it’s black-and-white fur patches that cover its entire body. There’s a new depiction on this side of the coin with each release year.

The obverse of the Gold Chinese Panda includes the Hall of Prayer for Abundant Harvests. Constructed during the reign of the Yongle Emperor, the Temple of Heaven was built during the same era as the famed Forbidden City in Beijing.

All of the 15 Gram Gold Chinese Panda coins offered here today come from varied years of issue. Silver.com cannot guarantee or reserve a specific date mark for you, but each coin is guaranteed to arrive inside of its original sealed packaging from the Chinese Mint.

Silver.com customer service is available to answer your questions at 888-989-7223. You can also connect with us online through our live chat and email address.