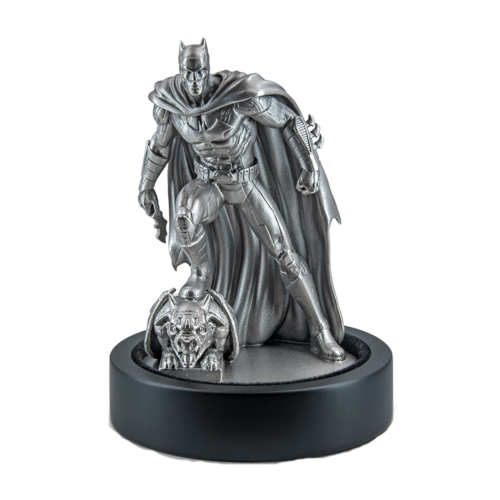 Silver statues have become popular options for investors and collectors in recent years. For those interested in comic-themed silver statues that are just the right size for display around the house, New Zealand Mint has you covered. The NZ Mint has recently introduced a series of DC Comics Miniature Statues, with the Dark Knight himself featured in the latest release. Right now, 150 Gram Silver Batman Miniature Statues are available to purchase online from Silver.com.

Each 150 Gram Silver Batman Miniature Statue available here comes with presentation packaging from the New Zealand Mint. The statues are held in black-velvet lined boxes with a DC Comics design theme on the exterior of the box. Inside the box are both the stand and the statue. The stand has the individual serial number and New Zealand Mint logo on the base of the statue.

Batman has featured in various different comic books associated with the DC Comics universe. Those books were published under the brands such as Vertigo and Black Label. However, the longest-running Batman-themed comic is Detective Comics. This is the series in which the Caped Crusader made his debut in March 1939. This particular comic series is the longest-running comic of its kind in the United States.

In the design of the 150 Gram Silver Batman Miniature Statues, you will see the Dark Knight as he appears in Batman: Rebirth, a release that came in 2016. In this design, he is shown standing at the ledge of a building where he rests his right foot on the head of a gargoyle. He has the Batarang in his hand.

These statues stand roughly 8 cm high and were designed by Alejandro Pereira Ezcurra, a renowned 3D master sculptor. The New Zealand Mint is the producer of these silver statues and is New Zealand’s only private mint. The mint is not, however, the sovereign mint of the nation. It produces bullion coins for other nations, but not for New Zealand.

If you have any questions when buying silver, please feel free to ask. Silver.com customer service is available to assist you at 888-989-7223, online using our live chat, and via our email address.