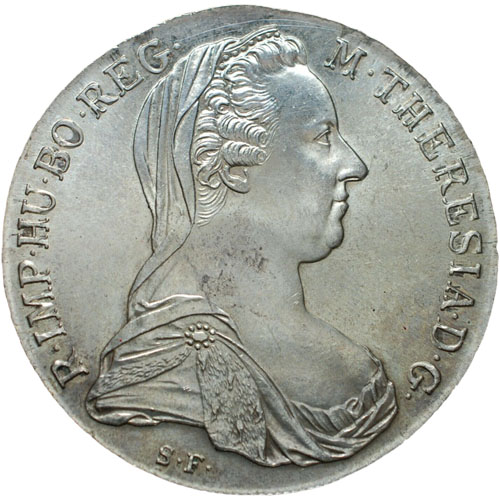 The 1780 Silver Austrian Mother Theresa Thaler is one of Europe’s most replicated coin designs. The actual Silver Thaler of this era was frozen with a 1780 date mark as of that same year due to the death of Maria Theresa in November of that year. That same design was used on circulating trade pieces until 1858. Modern restrikes of the coin have occurred over the decades at the Austrian Mint.

All of these 1780 Silver Austrian Maria Theresa Thaler Restrikes are available to you with plastic flips. These coins have .7517 Troy ounce of .833 silver, with the remaining .166 of the metal content consisting of copper. Please keep in mind that these coins are restrikes and not 1780 issues. The coins are offered in varied conditions, with Silver.com unable to guarantee the condition of the specific coin you receive. All items are chosen at random once your payment clears and will come from the available stock at that point in time.

On the obverse of 1780 Silver Maria Theresa Thaler Restrike Coins is a right-profile portrait of Maria Theresa. In 1740, Maria Theresa came to power as the Queen of Bohemia, Archduchess of Austria, and Queen of Hungary and Croatia. Upon her death, she was the sovereign of Austria, Hungary, Croatia, Bohemia, Transylvania, Mantua, Milan, Lodomeria and Galicia, the Austrian Netherlands, and Parma. She was also the Duchess of Lorraine, Grand Duchess of Tuscany, and the Holy Roman Empress, all titles she gained through marriage.

The reverse side of the 1780 Silver Austrian Maria Theresa Thaler Restrikes comes with a depiction of the Austrian coat of arms. It features a quartered shield with the Austrian arms and the imperial double-headed eagle.