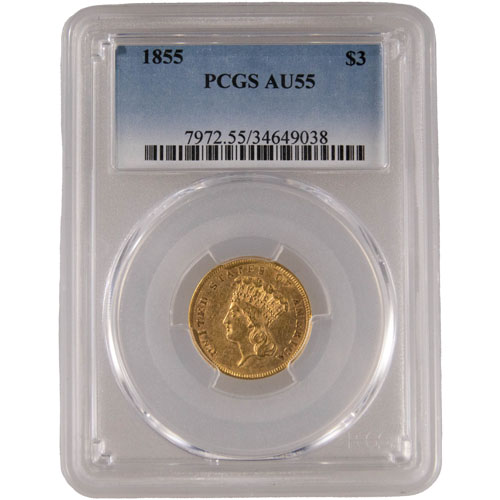 During the mid-to-late 19th century in the United States, gold coins from the US Mint saw varying production and usage across the country. One of the more unique pieces from this era was the Gold $3 Indian Princess. Introduced in 1854, the coin was predominantly issued by the Philadelphia Mint and San Francisco Mint over the course of its history, with production at southern branch mints largely halted during and after the Civil War. Now, 1855 Gold $3 Indian Princess Coins are available to you for purchase online at Silver.com.

In early 1853, Congress authorized the production of a three-dollar gold piece in the United States. This new gold coin was to be designed by the US Mint’s Chief Engraver, James B. Longacre, and would go into production in 1854. More than 100,000 specimens were produced in 1854 between the Philadelphia Mint, the New Orleans Mint, and the Dahlonega Mint. Dies for the coin were sent to the Charlotte Mint as well, but were never used.

The new Gold $3 Coin from the United States Mint was struck in large volumes in the first two years, with production largely tapering off after the 1850s and the onset of the Civil War. The coins circulated predominantly in Western states and territories during the Civil War as gold and silver hoarding were common on the East Coast. Additionally, the Charlotte, Dahlonega, and New Orleans Mints were all inactive during the Civil War.

The obverse design of the 1855 Gold $3 Indian Princess Coin comes with a left-profile bust of Lady Liberty. This distinctive design from James B. Longacre is very similar to his design for the $1 gold coin in the US. It features Liberty with a feathered, indigenous headdress.

On the reverse side of 1855 Gold Indian Princess Coins is an image of a wreath. Unlike the common oak-and-laurel wreaths of other gold and silver coins in the United States, this design shows a wreath made from corn, wheat, cotton, and tobacco.

These 1855 Gold $3 Indian Princess Coins come to you in PCGS slabs with an AU55 grade. Coins in this condition are very close to uncirculated condition. Most have medium or full mint luster, with the only flaws being extremely light or even trace friction limited to the highest relief points of the coin.