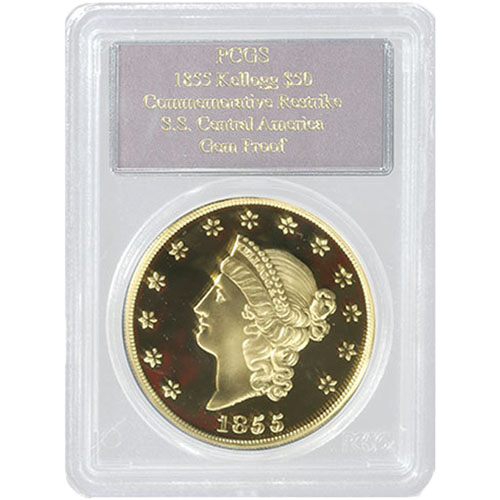 The waters of the global oceans are full of sunken ships, many of which were carrying treasures of all kind. The S.S. Central America was a steamer ship owned by the United States Mail Steamship Company. When it went sank off the Carolinas in September 1857, the steamer took down with it gold valued at the time around $150 million. Right now, 1855 Gold Kellogg $50 Commemorative S.S. Central America PCGS Gem Proof Coins are available to purchase online at Silver.com.

Each 1855 Gold Kellogg $50 Commemorative S.S. Central America coin in this product listing is considered a Gem Proof specimen. This does not include a specific numeric grade from the Sheldon scale, but Gem Proof coins are generally considered to fall between 63 and 67 on the Sheldon numeric scale.

When the S.S. Central America sank during a Category 2 hurricane in September 1857, it was carrying 5,200 gold pieces from the $20 Gold Double Eagle range recently minted in 1857 by the San Francisco Mint, a number of historic gold coins that circulated in the Wild West, and gold ingot bars. Much of the gold was recovered from the ship more than 130 years later when it was discovered in the waters off the coast of the Carolinas in 1988.

On the obverse of 1855 Gold Kellogg $50 Commemorative S.S. Central America coins is a left-profile effigy of Liberty. This Liberty Head design was created by Christian Gobrecht at the Philadelphia Mint and it featured on the circulating $20 Gold Double Eagle coins produced during the mid-19th century.

The reverse side of 1855 Gold $50 Commemorative S.S. Central America coins features the 19th-century heraldic eagle of the United States of America. This bald eagle is perched on an olive branch as it clutches the arrows of war in one talon and the US national shield rests against its body. The inscription above the design field includes “San Francisco, California” and the one below includes “Fifty Dolls.”

If you have any questions about these gold coins, please feel free to reach out to Silver.com. You can call us on the phone at 888-989-7223, chat with us live online, or simply send us an email with your questions.