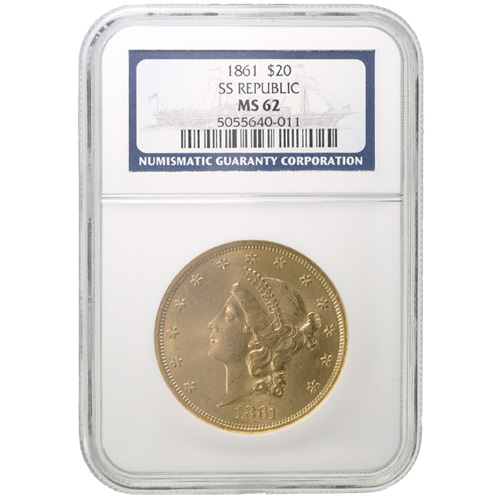 In 1861, the SS Republic was transporting $400,000 worth of US gold coins, most of which were 1861 dated $20 Gold Liberty Double Eagle coins. The ship sank in the early days of the Civil War and would hold its treasures for more than 130 years. In 2003, a private research team recovered the treasure of 1861 Pre-33 $20 Gold Liberty Double Eagle Coins.

At this point in US history, the $20 Gold Liberty Double Eagle was the largest denomination of gold coin ever issued by the US, and remains the largest ever in circulation. Available since 1849 when a handful of proofs were struck, Americans were hoarding the Gold Double Eagle in 1861 as the threat of the Civil War loomed on the horizon. That makes these specimens are very rare chance to get early Pre-33 $20 Gold Liberty Double Eagles.

The reverse of 1861 Pre-33 Liberty Double Eagles features the first subtype design. The Great Seal of the United States of America is featured without the national motto engraving and a face value marking of “twenty D” rather than the later “twenty dollars.”

We encourage Silver.com customers to contact us at 888-989-7223 with questions. You can also reach out to us online through our live chat and email address features.