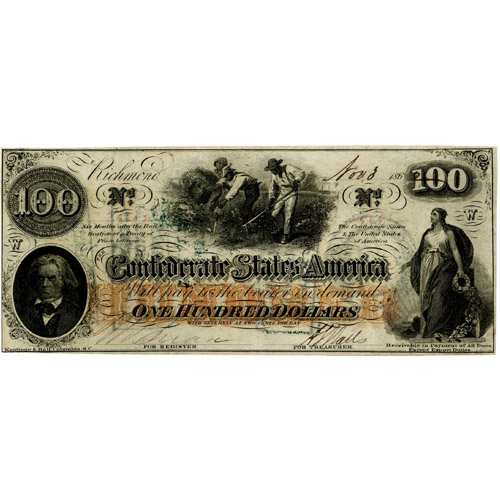 Prior to the outbreak of the US Civil War, the Confederate States of America began to issue currency in the Confederate States dollar. The Confederacy did not have the minting or printing capacity of the Union, and instead turned to private companies and banks to strike coins and print notes for the currency. Now, 1862-1863 $100 Confederate Currency Notes are available to you for purchase online at Silver.com.

Confederate States dollars had designs that were often limited to just the obverse of the note. In many cases, the Confederacy issued varying designs on the obverse of the same denomination within the same series. For example, the 1862-1863 $100 Confederate Currency Note featured the designs on these $100 notes, as well as other depictions of a milkmaid and a steam train barreling along the tracks.

Another facet of Confederate States dollars that stood out was the visual appearance of the notes. Most Confederate notes were cut by hand, signed by hand, and given serial numbers and dates that were written in by hand as well. One of the relics of history that feature on Confederate dollars is the use of racist designs, such as the image of slaves picking cotton in a field as found on these notes.

The obverse of 1862-1863 $100 Confederate Currency Notes features a depiction of John C. Calhoun in the lower-left field. Calhoun had a long tenure in the US government prior to the Civil War. He served in the US House of Representatives from South Carolina, served as the 10th US Secretary of War, 16th US Secretary of State, and as a US Senator from South Carolina. Other designs include the vignette of slaves working in a field with a female allegory representing the Confederacy in the lower right. On the reverse side of $100 Confederate Currency Notes is a blank field.