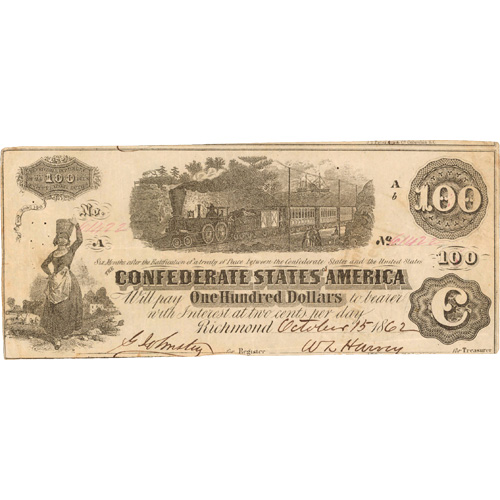 Just months before the outbreak of war between the United States and the Confederate States of America, the Confederacy began to issue coins and banknotes for the Southern economy and to finance the war with the Union. Right now, 1862-1863 $100 Confederate Currency Notes are available to you online at Silver.com in Very Fine condition.

Each 1862-1863 $100 Confederate Currency Note available here at Silver.com comes in Very Fine condition. The notes will ship to you in individual currency sleeves to protect the condition. A note that is considered Very Fine comes with typical signs of circulation use, including rounded corners, modest wear patterns, and numerous fold lines. You may also notice mild soiling on the notes.

The Confederate States of America issued banknotes and coins through no fewer than 10 separate banks and private companies. Confederate States dollars were not backed by hard assets and the financial power behind the notes was often put forward by an individual person or bank. After the war, when the Union refused to honor Confederate dollars and debts, Confederate banknotes were rendered useless and countless individuals and banks were ruined.

If you have any questions, please contact Silver.com. Our customer service team is available at 888-989-7223, online using our live chat, and through our email address.