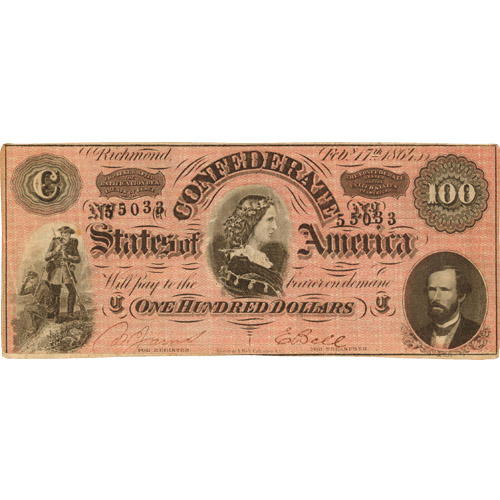 All of these 1864 $100 Confederate States of America Notes are available with plastic currency sleeves in Very Fine condition. The accepted visual range for a note in Very Fine condition starts with moderate wear and tear, mild soiling, and numerous folds at the low end. On the high end, notes have only light wear and tear, light soiling, and no more than 10 folds. All of the notes are free of serious detractions.

On the obverse side of the 1864 $100 CSA Note is an effigy of Lucy Pickens at the center, flanked by George W. Randolph on the right and a depiction of Confederate soldiers on the left. Pickens as a well-known socialite in the South who become known as the “Queen of the Confederacy,” while Randolph was a prominent lawyer, planter, politician, and military figure in the Confederacy. During the war, he served early on with the 2nd Regiment of Virginia Artillery and later served as Secretary of War for the Confederacy.

The reverse face of 1864 $100 Confederate States of America Notes comes with a depiction of the denomination. The assigned value is noted in both letters and numbers on this face of the note.

Please contact Silver.com with your questions. Our team is available on the phone at 888-989-7223, online using our live chat, and via our email address.