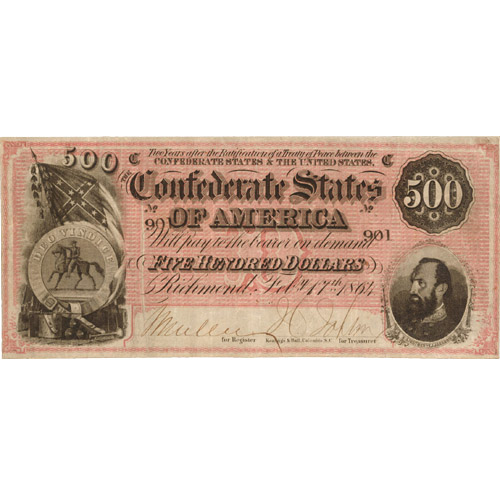 Shortly after seceded from the Union and just months before the start of the Civil War, the new Confederate States of America began to issue currency in the Confederate States dollar denomination. The money was never back by hard assets and only worth the promise printed on the note to pay the bearer after the end of the war. When the United States refused to recognize the debts and currencies of the South, the notes were rendered useless. However, today the notes command collectible interest among monetary enthusiasts. Now, 1864 $500 Confederate States of America Notes are available to you for purchase online at Silver.com.

All Confederate States dollars were issued with a promise to pay the bearer of a given note after the conclusion of the war. In many cases, there was printed text on the notes indicating the timeline and circumstances for repayment of the notes. This was often set as two years after the ratification of a peace treaty between the United States and the Confederate States. With the Confederacy’s loss in the war, banks and individuals backing the notes lost huge sums of money.

Many of the Confederate States dollars issued during the course of the war were hastily printed and released. Most notes showcase uneven lines because when a batch of notes was printed, the individual notes were cut from the printed sheet by hand with scissors. It was also common to find handwritten serial numbers signed by the clerks that cut the sheets.

The largest denominations issued by the Confederacy came with the First Series authorized by the Act of March 9, 1861. This release authorized $1 million notes released in denominations that initially included $50, $100, $500, and $1,000. The Act was amended in August 1861 to include an additional $1 million in notes with additional $50 and $100 denominations. These 1864 notes are from the seventh and final series. Authorized by the Act of February 17, 1864, $200 million in notes were produced. The $500 note was the largest denomination.

1864 $500 Confederate States of America Notes come in plastic currency sleeves. Each note is in Very Fine condition. Acceptable flaws at this grade range from light wear and tear, light soiling, and no more than 10 fold lines to moderate wear, mild soiling, and the presence of numerous fold lines.

Silver.com customer service can assist you at 888-989-7223. Alternatively, you can contact us online through our live chat and email address features.