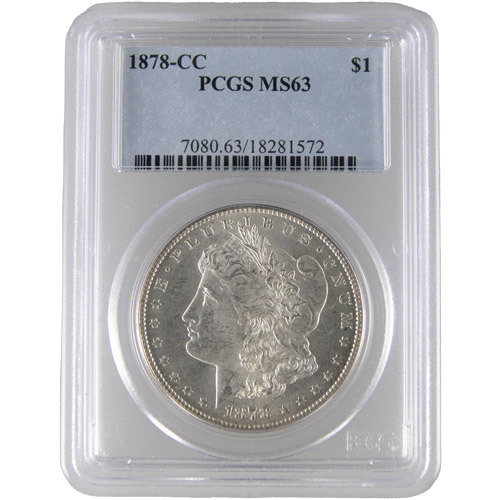 The first year of issue for the Silver Morgan Dollar was 1878. The coin series would be issued annually from 1878 to 1904, and then see one final issue in 1921. Among the first mints to issue the coins was the Carson City Mint in Nevada. Right now, certified 1878-CC Silver Morgan Dollars are available to purchase online from Silver.com.

Each of the 1878-CC Silver Morgan Dollars offered here comes with a Mint State 63 certification and arrives in a protective slab. Coins in this condition often exhibit impaired mint luster with several, small contact marks and numerous heavier marks. It is also possible for the coins to present with small patches of hairlines.

The Carson City Mint introduced Silver Morgan Dollars in 1878 for the first time. This was done at the same time that the Philadelphia Mint and San Francisco Mint began striking the new silver dollar design. While the latter two mints would go on to strike the coins every year through 1904 and again in 1921, the Carson City Mint issued the coins from 1878 to 1885 and from 1889 to 1893.

The obverse of the 1878-CC Silver Morgan Dollar comes with a portrait of Lady Liberty. George T. Morgan created this effigy of Liberty in 1878 for the release of this series. It features the head of Liberty in left-profile relief with a Phrygian cap on. She is also depicted with a coronet crown and a laurel wreath crown on her head.

On the reverse side of 1878-CC Silver Morgan Dollars is the heraldic eagle of the United States. Morgan also created this design for the series and it shows the bald eagle in front-facing relief clutching the arrows of war and the olive branch of peace in its talons. The bird is flanked by an oak-and-laurel wreath.

If you have any questions, Silver.com customer service is here to help. You can call us at 888-989-7223, chat with us live online, or simply send us an email with your inquiries.