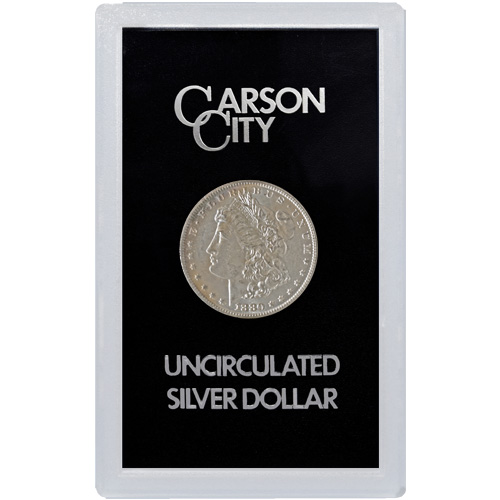 By 1880, Silver Morgan Dollars were being issued in the millions by four different branch facilities of the United States Mint. Three of the four mints issued the coins with a mint mark, with Philadelphia being the outlier in not issuing mint marks. The mint that issued the fewest Morgan Dollars each year was the Carson City Mint. As such, its date marks in the series have become one of the primary targets for collectors. Today, 1880-CC Silver Morgan Dollars with GSA holders are available to you online at Silver.com.

All of these 1880-CC Silver Morgan Dollars come with the original GSA hard plastic holder. When the Silver Morgan Dollar hoard in the US Treasury vaults was discovered, the GSA cataloged and packaged the coins for eventual release to the public. The uncirculated coins were offered up to the public in a series of auctions in the 1970s and the 1980s.

On the obverse of 1880 Silver Morgan Dollars is an image of Liberty. This Liberty portrait in left-profile relief was designed by George T. Morgan in 1878 for the release of the new silver dollar following a five-year hiatus in coining. Morgan’s design captured Liberty with a coronet and wreath crown in her hair. A ring of 13 stars is present around the portrait of Liberty with a date mark at the bottom.

The reverse side of the 1880-CC Silver Morgan Dollar Coins comes with a 19th-century depiction of the heraldic eagle. Also designed by Morgan, this image features the bald eagle in front-facing relief as it clutches the arrows of war and the olive branch of peace in its talons.

Please don’t hesitate to reach out to us with any questions. Silver.com customer service is available at 888-989-7223, online through our live chat, and via our email address.