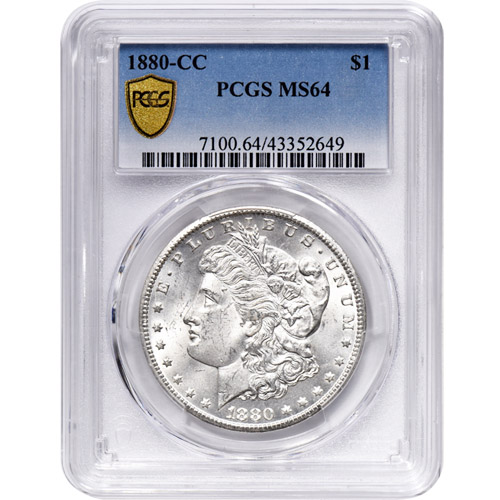 In 1878, the United States Mint resumed silver dollar coining with the introduction of the Silver Morgan Dollar. In the first year of issue, three mints contributed to the production of the coins, with the Carson City Mint being one of them. The Morgan Dollars were issued continuously from 1878 to 1904, but the Carson City Mint’s contribution included only 13 releases during this period. Now, certified 1880-CC Silver Morgan Dollars are available to you for purchase online at Silver.com.

The Carson City Mint was one of the first three to issue Silver Morgan Dollars in 1878 alongside the Philadelphia Mint and the San Francisco Mint. While the latter two, and the New Orleans Mint starting in 1879, issued the coins every year until 1904, the Carson City Mint had a disrupted production.

Carson City issued the coins annually from 1878 to 1885. After a three-year hiatus, it resumed coining in 1889, but would only strike the coins until 1893 when it closed. The Carson City Mint had the lowest mintage figures of all four mints and hundreds of thousands of its coins ended up in Treasury vaults, rather than in circulation. In the 1960s, these coins were discovered by the GSA and auctioned off to the public in the 1970s. From the original mintage of 591,000 CC-Silver Morgans in 1880, some 131,529 coins were discovered by the GSA in the 1960s.

The obverse of the 1880-CC Silver Morgan Dollar features a portrait of Lady Liberty. This effigy of Liberty is set in left-profile relief and the design field includes 13 stars along the lower half of the field. Liberty wears a Phrygian cap on her head with the laurel wreath and coronet crown in her hair.

On the reverse of 1880-CC Silver Morgans is a depiction of the heraldic eagle of the United States. This visual showcases a bald eagle in front-facing relief with the arrows of war and the olive branch of peace in its talons. The CC mint mark is located beneath the bow in the oak-and-laurel wreath that frames the bird.

These 1880-CC Silver Morgan Dollars are in Mint State 64 condition. Specimens in this condition showcase average mint luster for the date and strike, with the potential for small clusters of contact marks, some of which may be in the prime focal areas, and scattered hairlines or one larger patch.

Silver.com customer service is available to you at 888-989-7223. Alternatively, you can chat with us live online or email us directly.