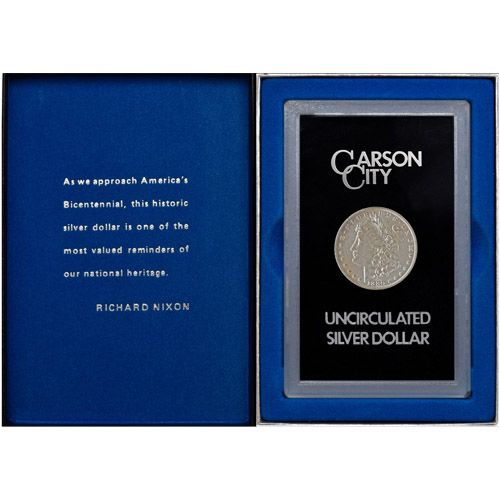 Each of the 1880-CC Silver Morgan Dollars available here at Silver.com come with all of the original packaging from the Government Services Administration. To present the coins to collectors in its auctions during the 1970s and 1980s, the GSA packaged the coin itself in a hard plastic holder that was then packaged in a presentation box with an included Certificate of Authenticity.

Many of the original buyers who purchase GSA Silver Morgan Dollars at auction during the 1970s and 1980s eventually had their coins graded by the NGC and PCGS. As such, the presentation boxes and COAs were lost for many of the coins. As such, fewer of the existing GSA Silver Morgan Dollars still have all of the original packaging from the GSA as these coins at Silver.com do.

The obverse side of 1880-CC Silver Morgans features a left-profile bust of Lady Liberty. This design maintains the style of Classical Antiquity in its depiction of Liberty, with Greco-Roman visuals for the female allegory. She is shown wearing the coronet and wreath crown in her hair with a ring of 13 stars around her bust.

On the reverse of 1880-CC Silver Morgan Dollars have a design of the heraldic eagle. George T. Morgan designed both sides of the Morgan Dollar in 1878. His heraldic eagle was a departure from other designs of the day in its lack of the US national shield on the chest of the bald eagle. The eagle still clutches the olive branch of peace and the arrows of war in its talons.

Carson City issued a total of just 591,000 coins in 1880. Many of the Carson City-issued Silver Morgans in the 1870s, 1880s, and 1890s never made it into circulation. Instead, most wound up going directly to US Treasury vaults, explaining the massive hoard of 19th-century coins discovered in the 1960s as the US Treasury began paying out vast amounts of silver to Americans holding Silver Certificates.