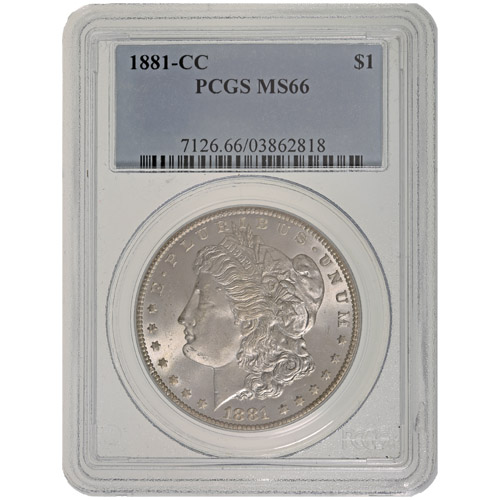 The United States Mint issued silver dollars throughout the 19th century and early decades of the 20th century. One of the longest-running and most popular designs featured the image of Liberty used on the Morgan Dollars from 1878-1904, and again in 1921. Now is your chance to purchase an 1881-CC Morgan Silver Dollar Coin online at Silver.com with a certification from the PCGS!

The Morgan Silver Dollar was first issued in 1878 after a five-year hiatus in the coining of silver dollars by the United States Mint. The Coinage Act of 1873 ended a process known as free silver coining in the US that allowed individuals to turn silver into the mint for refining and striking into coinage. The Coinage Act of 1873 also led to the end of the Seated Liberty silver dollar design.

In 1878, a new design for the reintroduced silver dollar featured Liberty’s portrait and the heraldic eagle of the United States. Both designs were created by George T. Morgan for the United States Mint. The designs were used, unchanged, from 1878 to 1904. The Morgan Silver Dollar returned briefly in 1921 during the post-war era, but was eventually replaced in that same year by the Peace Silver Dollar design.

On the obverse of 1881-CC Morgan Silver Dollar Coins is the left-profile image of Lady Liberty. Anna Willess Williams was Morgan’s inspiration for this bust of Liberty and she sat with him through numerous sessions for him to get the design right.

The reverse of 1881 Morgan Silver Dollars includes the design of the heraldic eagle of the United States. Long used on American coinage dating back to 1794, the heraldic eagle boasts the image of an American bald eagle behind the national shield as it clutches arrows in one talon and an olive branch in the other.

These 1881-CC Morgan Silver Dollar Coins come to you with an MS66 certification from the PCGS. Coins in Mint State 66 condition showcase above average quality for surface and mint luster, impressive for coins that are more than 130 years old today! There are no more than three or four minor contact marks on the coin and only a few light hairlines visible only with magnification. Each coin includes a “CC” mint mark from the Carson City Mint, a US Mint branch facility that operated from 1870-1885 and again from 1889-1893.

We encourage Silver.com customers to call us at 888-989-7223 with questions. You can also reach us online through our live chat and email address features.