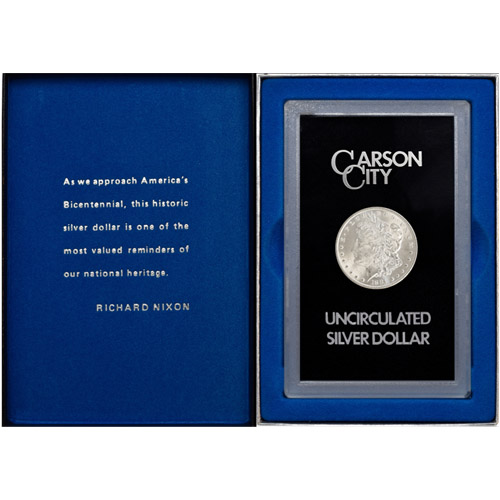 Over the course of the coining history of the Silver Morgan Dollar, five branch facilities of the United States Mint struck the coins. In 1878, Philadelphia, Carson City, and San Francisco issued the coins. Starting in 1879, New Orleans began striking Morgans as well. The Denver Mint issued the coins only once, in 1921. The Carson City Mint-issued Silver Morgan Dollars have long been considered among the hardest to find because of the age of the coins and the low mintage figures at Carson City. Many of the coins available to collectors today come from Government Services Administration-released coins found in US Treasury vaults in the 1960s. Now, 1881-CC Silver Morgan Dollars with original GSA packaging are available to you for purchase online at Silver.com.

When compared to average annual mintages of 9 million, 12 million, and 5 million coins at the Philadelphia, San Francisco, and New Orleans branch mints, respectively, during this period, Carson City coins are far more unique. 1881 registered as the second-lowest mintage in the series overall and second-lowest from Carson City. The only lower mintage mark came from Carson City in 1885.

The obverse of 1881-CC Silver Morgan Dollars features George T. Morgan’s effigy of Lady Liberty. This left-profile portrait depicts Liberty with a ring of 13 stars around her head, her hair up in a cap, and a few strands of curly hair dangling down the side of her neck.

On the reverse face of 1881-CC Silver Morgan Dollars is an image of the heraldic eagle. One of the few depictions from the 19th century in which the eagle is not shown supporting the US national shield, Morgan created a design with a front-facing bald eagle clutching the arrows of war and the olive branch of peace.

Silver.com customer service is happy to answer your questions at 888-989-7223. We are also available to you online through our live chat and email address features.