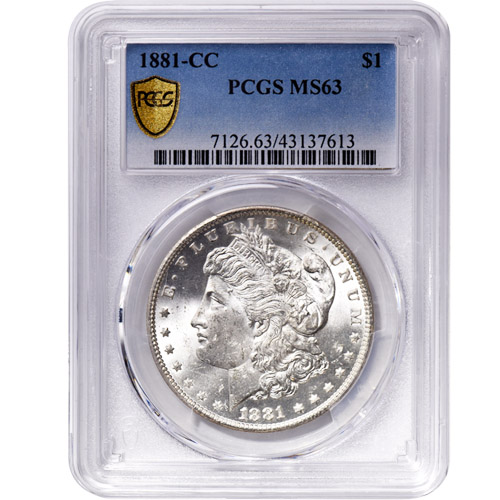 Over the course of its history, there were well over 100 million Silver Morgan Dollars issued. The coins were struck from 1878 to 1904 and again for a final time in 1921. The Philadelphia Mint and San Francisco Mint issued millions of coins each year for all of the aforementioned date marks.

The obverse of the 1881-CC Silver Morgan Dollar features an image of Liberty in left-profile relief. This design from George T. Morgan shows the head of Liberty with a Phrygian cap on, as well as the coronet crown and a laurel wreath.

On the reverse side of 1881-CC Silver Morgan Dollar Coins is a depiction of the heraldic eagle of the United States. This design features the American bald eagle in front-facing relief with the arrows of war in one talon and the olive branch of peace in the other. The bird is framed by an oak-and-laurel wreath.

These 1881-CC Silver Morgan Dollars come with a Mint State 63 certification and protective slab. Coins in this condition showcase impaired mint luster, the possibility for several small contact marks and/or heavier contact marks, and light hairlines that are visible without the aid of magnification.

Silver.com customer service is available at 888-989-7223. You can also chat with us live online or simply send us an email with your questions.