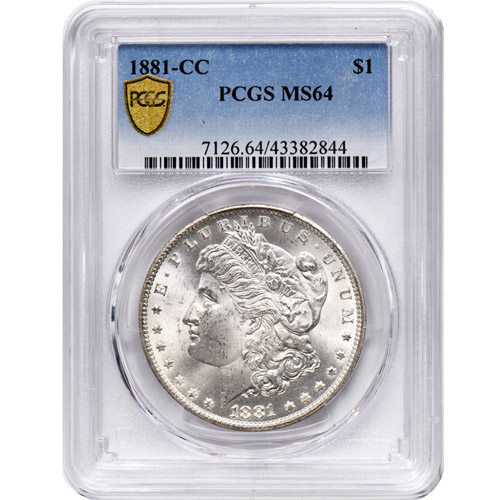 The Carson City Mint was purpose-built by the United States Mint to leverage local sources of precious metals in the production of circulation coins in the United States. Like the Dahlonega Mint and Charlotte Mint before it on the East Coast, both of which predominantly struck gold coins for the US, the Carson City Mint was positioned in the region of rich silver mines and struck predominantly silver coins for circulation in the American West.

All of the 1881-CC Silver Morgan Dollars in this listing come with a PCGS certification and protective slab. Mint State 64 coins remain quite attractive for their age, with average mint luster common for most coins. Light scattered marks, some heavier marks, and a few marks in the primary focal points are common in MS64 specimens. So too are one or two small patches of hairlines.

On the obverse of 1881-CC Silver Morgan Dollars is a depiction of Liberty. This left-profile effigy was designed in 1878 by George T. Morgan and shows Liberty with the Phrygian cap on the back of her head, as well as the coronet crown and laurel wreath.

The reverse side of 1881-CC Silver Morgan Dollar Coins comes with a unique version of the heraldic eagle of the United States. This design was also created by Morgan and shows the bald eagle in front-facing relief with the arrows of war in one talon and the olive branch of peace in the other. The bird is framed by a wreath of oak and laurel with a CC mint mark under the wreath.

Silver.com customer service is available to assist you with any questions. Please call us at 888-989-7223, chat with us live online, or email us directly.