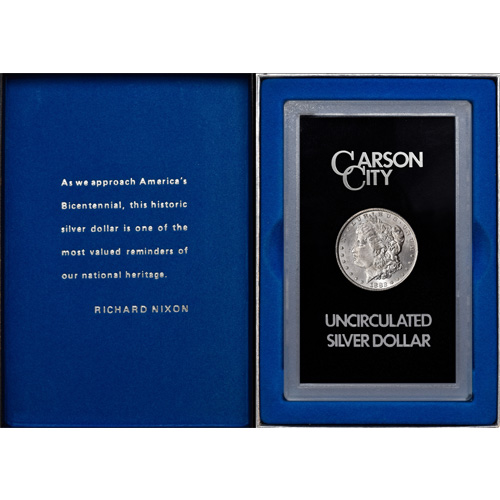 The Carson City Mint was one of the few US Mint branch facilities established with a specific coining purpose in mind. Much like the Charlotte and Dahlonega Mints, the Carson City Mint was opened to take advantage of locally-sourced precious metals in the creation of national coinage. Unlike Charlotte and Dahlonega, Carson City’s main priority was the production of silver coinage. Today, 1882-CC Silver Morgan Dollars with original GSA packaging are available to you online at Silver.com.

In the 1830s, the US Mint opened its first-ever branch facilities in the form of the new Charlotte Mint in North Carolina and the Dahlonega Mint in George. Both mints were opened strictly to produce gold coins using local deposits of gold found in the region during this era. Fast forward 40 years, and the US Mint opened the Carson City Mint to take advantage of vast deposits of silver found throughout Nevada and the West Coast. Though the Carson City Mint did strike gold coins, it primarily struck Silver Morgan Dollars and other US silver coinage.

All of the 1882-CC Silver Morgan Dollars offered here today are GSA-packaged coins. GSA stands for the Government Services Administration, the arm of the US government that audited and later auctioned the vast stores of Morgan Dollars discovered in US Treasury vaults in the 1960s. You will receive a coin in this listing that was packaged inside a hard place holder with an included presentation box and a Certificate of Authenticity.

Lady Liberty can be found on the obverse of 1882-CC Silver Morgan Dollars. The creator of the images on both sides of the Silver Morgan Dollars was George T. Morgan, a recent migrant to the United States from the United Kingdom who had landed a job as a US Mint Assistant Engraver with the recommendation of the head of the Royal Mint of England. Morgan’s design was created with the help of Anna Willess Williams sitting as a model for his portrait of Liberty.

Morgan’s version of the heraldic eagle is depicted on the reverse side of the 1882 Silver Morgan Dollar. The design is a notable departure from other designs of the 19th century in its lack of a US national shield in front of the American bald eagle. The bald eagle clutches the arrows of war and the olive branch of peace in its talons.

Please contact Silver.com if you have any questions. Our team is available to you at 888-989-723, online through our live chat, and using our email address.