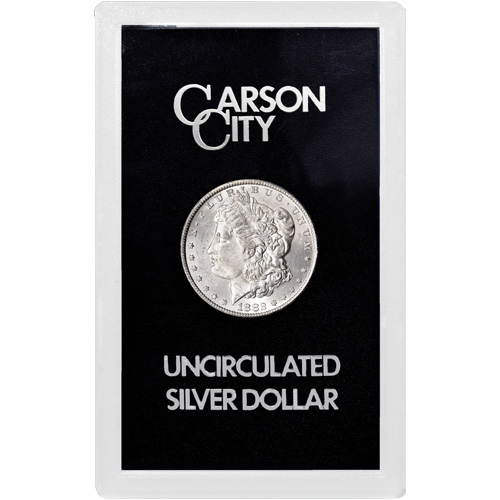 In the 1960s, the US Treasury found that massive hoards of Silver Morgan Dollars were stashed away in its vaults that had never been released into circulation. Among the $3 million in Morgan Dollars found in the vaults, an audit by the Government Services Administration discovered 95% of the coins were from the Carson City Mint and included dates from 1878-1885 and 1890-1891. Right now, 1882-CC Silver Morgan Dollars with GSA packaging are available to purchase online at Silver.com.

Each 1882-CC Silver Morgan Dollar in this listing comes with the main packaging originally offered by the GSA. Following the audit, the GSA conducted public auctions to disperse the Carson City Silver Morgan Dollars to collectors. The coins were housed directly in hard plastic holders, just as these coins are offered to you here today.

On the obverse of 1882-CC Silver Morgan Dollar is an effigy of Liberty. The left-profile portrait captures the common Greco-Roman imagery of Liberty from the 19th century. She wears both a wreath crown and a coronet in her hair.

The reverse side of 1882-CC Silver Morgans comes with a depiction of the heraldic eagle of the United States. George T. Morgan developed both the obverse portrait of Liberty and this reverse image of the heraldic eagle. Here, you will find a front-facing bald eagle with the olive branch of peace and the arrows of war in its talons.

The Carson City Mint was established in 1863, but did not open for operational coining until 1870. The mint primarily struck silver coins for the United States Mint from 1870 to 1885 and again from 1889 to 1893 when it closed permanently. From 1878-1885 and 1889-1893, the Carson City Mint’s primary contributes included the coining of Silver Morgan Dollars.

If you have questions, Silver.com customer service has the answers. Our team is available at 888-989-7223, online using our live chat, and via our email address.