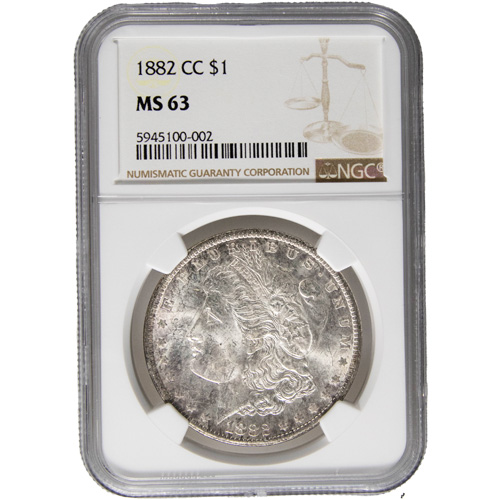 Silver Morgan Dollars were issued at the Carson City Mint from 1878 to 1885 and again from 1889 to 1893 when the mint was permanently closed. Many of the Carson City Mint Silver Morgan Dollars, already offering low mintage figures, ended up in US Treasury vaults to back Silver Certificates issued in the US. When the GSA Hoard of Silver Morgans were released after being found in Treasury vaults in the 1960s, more than 53% of the original 1882-CC Silver Morgans were sitting in Treasury bags nearly a century after being struck.

Lady Liberty is on the obverse side of 1882-CC Silver Morgan Dollars. This design from George T. Morgan was created in 1878 for the series and features Liberty in left-profile relief. She is wearing a Phrygian cap with a coronet crown and a laurel wreath. There are 13 stars around the portrait of Liberty.

In the reverse design of 1882-CC Silver Morgans, you will find the heraldic eagle of the United States of America. This design shows the American bald eagle in front-facing relief with the arrows of war and the olive branch of peace in its talons. The eagle is surrounded by a laurel wreath.

These 1882-CC Silver Morgan Dollars are in Mint State 63 condition. Coins in this condition showcase mint luster that is slightly impaired with small clusters of minor contact marks, a few heavier contact marks, and small hairlines that are noticeable without the aid of magnification.