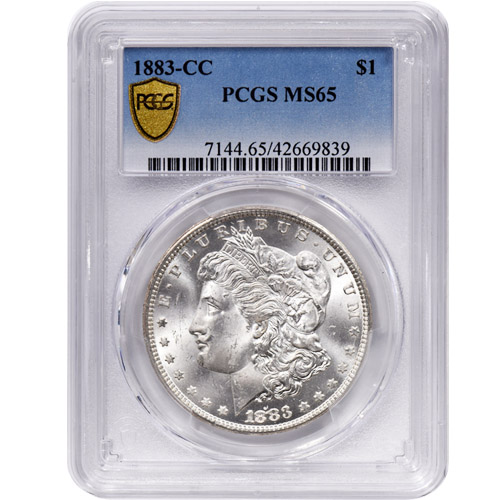 The 1883-CC Silver Morgan was issued during the initial 1878-1885 coining of the silver dollars at the Carson City Mint. Only the 1878 release had a higher mintage during this period, making this the second-highest date mark. However, when you include the coins issued from 1889 to 1893, the 1883-CC falls to the fifth-highest date in the series. The survival rate of 1883-CC Silver Morgans in Mint State conditions is relatively high due to the fact that about 62.75% of the original mintage spent nearly a century in Treasury vaults and was only recently released to collectors in the 1970s.

All of these 1883-CC Silver Morgan Dollars are available to you in Mint State 65 condition. Coins with this grade still have high-quality mint luster visible and come with a respectable range of flaws for the grade. These flaws include the potential for clusters of small contact marks, one or two heavier contact marks, and/or small patches of hairlines throughout the field. The coins are still visually appealing.

On the obverse of 1883-CC Silver Morgans is an effigy of Lady Liberty. Designed in 1878, this portrait shows Liberty in left-profile relief with the coronet and laurel crowns in her hair and a Phrygian cap on her head.

The reverse side of 1883-CC Silver Morgan Dollars features a depiction of the heraldic eagle of the United States. Like many early versions of the seal, this design lacks a US national shield. It does, however, feature the arrows of war and the olive branch of peace in the talons.

Please contact Silver.com with any questions. Our team can assist you at 888-989-7223, online using our live chat, and via our email address.