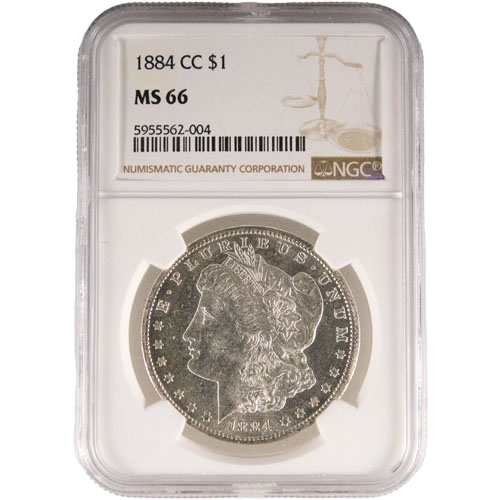 The Carson City Mint was built by the US Mint to take advantage of local sources of silver discovered in the American West in the 1860s and 1870s. Chief among these was the Comstock Lode. Though the Carson City Mint did issue some gold denominations of American coinage, its primary role was to strike silver coins, with the Silver Morgan Dollar the most common and popular from the mint.

The obverse side of 1884-CC Silver Morgan Dollars features the left-profile bust of Lady Liberty. This design was created in 1878 by George T. Morgan for the coin program and features the image of Liberty wearing a Phrygian cap, coronet crown, and a laurel wreath. This side of the coin also features 13 stars.

On the reverse face of 1884-CC Silver Morgan Dollars is an image of the heraldic eagle of the United States. The design shows the American bald eagle in front-facing relief with its wings spread wide as its talons clutch the arrows of war and the olive branch of peace.

These 1884-CC Silver Morgan Dollar Coins are available to you in MS66 condition with plastic slabs. The MS66 grade is for coins with an above-average mint luster, no more than four small contact marks, light hairlines only visible under magnification, and the possibility for one or two light scuff marks.