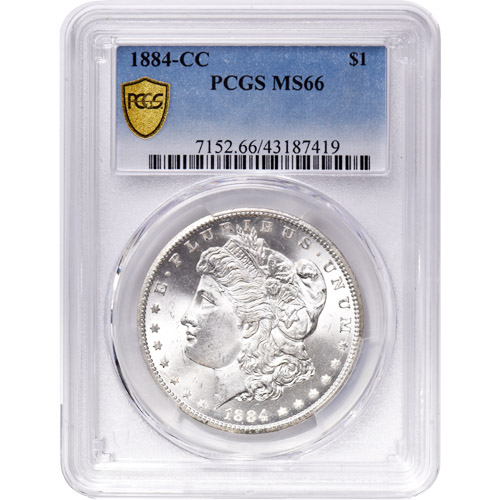 The release of Silver Morgan Dollars at the United States Mint took course over a period of 1878 to 1904, and once again in 1921. During this period of time, the US Mint used five branch mint facilities to issue the coins. The Denver Mint issued the coins the fewest number of times, just once in 1921. However, the Carson City Mint had the next lowest number of issues. Now, 1884-CC Silver Morgan Dollars are available to you for purchase online from Silver.com in certified condition.

Liberty features on the obverse of 1884-CC Silver Morgan Dollars. This left-profile relief shows Liberty wearing a Phrygian cap with a coronet and laurel wreath in her hair. The design field also includes 13 stars, six on one side of Liberty’s bust and seven on the other side.

These 1884-CC Silver Morgan Dollar Coins come to you in plastic slabs with Mint State 66 grade. Coins in this condition showcase above-average mint luster and have only a few scattered contact marks that are small and may be present in the primary focal points of the coin. It is also possible that light hairlines may be present, but these are only visible under magnification.