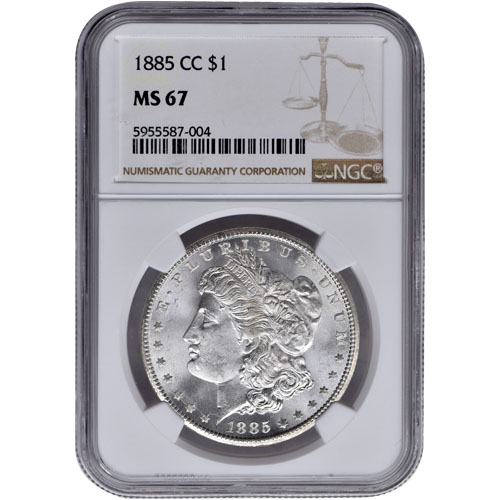 The Carson City Mint was one of three purpose-built mints in the US Mint system in the 19th century. Previously, the Charlotte Mint and Dahlonega Mint on the East Coast were built to produce coins for the nation using local precious metals sources. In the case of both mints, it was gold coining.

The obverse of the 1885-CC Silver Morgan Dollar comes with a depiction of Lady Liberty in left-profile relief. This design was created by George T. Morgan in 1878 for this series and features Liberty wearing a coronet crown, a laurel wreath, and a Phrygian cap. There are 13 stars in the design element and a date mark of 1885 at the bottom.

On the reverse side of 1885-CC Silver Morgan Dollars is a vision of the American bald eagle. In this design, the bald eagle is in front-facing relief and clutches the arrows of war and the olive branch of peace in its talons.

These 1885-CC Silver Morgan Dollars arrive with plastic slabs and have a Mint State 67 certification. Coins in this condition showcase original mint luster with three to four minuscule contact marks, one or two of which may be inside the primary focal fields of the coin. There may be one or two hairlines, but are not visible unless you have the aid of magnification.

Silver.com customer service is available to assist you at 888-989-7223. We are also available to you online using our live chat and email address features.