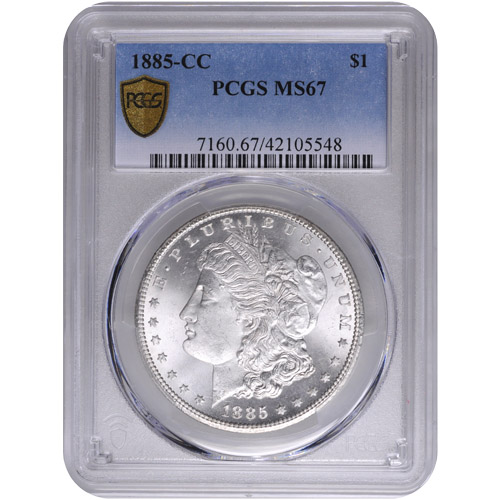 The Silver Morgan Dollars were issued by the United States Mint for 28 years in the 19th and 20th centuries. The coins were primarily issued from 1878 to 1904, with a single release in 1921 to complete the series before the launch of the Peace Dollar. The Carson City Mint contributed to the production of these coins in two spurts, with its efforts ending in 1893 when the mint closed. Right now, 1885-CC Silver Morgan Dollars with certification from the PCGS are available to purchase online at Silver.com.

Each 1885-CC Silver Morgan Dollar in this listing comes to you with a PCGS certification. These coins are more than 135 years old, but still have the original luster with no more than four minuscule contact marks and one or two small hairlines. One or two of those contact marks may be in the primary focal fields, while none of the hairlines are visible without magnification.

The obverse side of 1885-CC Silver Morgan Dollars comes with an image of Lady Liberty. In this left-profile portrait, you will find Liberty wearing the coronet crown, a laurel wreath, and a Phrygian cap. There are 13 stars in the design field with the date mark at the bottom.

On the reverse face of 1885-CC Silver Morgan Dollar Coins, you will notice the heraldic eagle of the United States. This version of the heraldic eagle lacks a US national shield, but does include the front-facing bald eagle with the arrows of war and the olive branch of peace in its talons.

Carson City Mint Silver Morgan Dollars are widely regarded as some of the rarest. The Carson City Mint’s highest mintage came in 1878 when it released 2.212 million coins. The average mintage outside of that debut year was around 250,000 coins. The 1885 coin had a mintage of 238,000 coins, with some 148,300 of those coins discovered in US Treasury vaults in the 1960s having never been released to the public.

If you have questions, Silver.com is here to help. Our customer service team is available to assist you at 888-989-7223, online using our live chat, and via our email address.