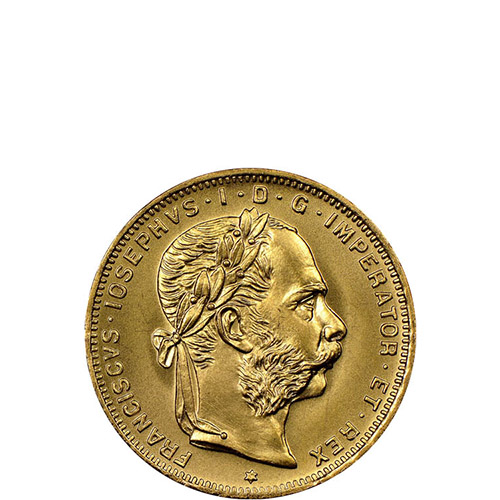 Any quantity available for $18.99 per coin over spot!

The Austro-Hungarian Empire was once among the largest empires in the world. During its heyday in the late 19th and early 20th centuries, the Austro-Hungarian Empire was the second-largest empire in total land area behind the Russian Empire and third-most populous behind the Russian Empire and German Empire. Right now, 1982 20 Francs/8 Florin Gold Austrian Coins from the days of the empire are available to purchase online at Silver.com.

Each of the individual 1892 20 Francs/8 Florin Gold Austrian Coins in this listing is a restrike coin from the Austrian Mint issued with an 1892 date mark. The coins available here today are in Average Circulated condition. This means the coins have been handled outside of protective packaging in the past and could show signs of wear and tear ranging from minuscule contact marks and hairlines to scuffs, dents, or more visible contact marks.

What makes this coin valuable is the dual denomination issued to it by the Austrian Mint. The Francs denomination dominated the European continent throughout the mid- to late-19th century as a coin value circulating in France, Switzerland, Belgium, the Netherlands, Italy, and the Austro-Hungarian Empire. This coin has the Florin face value issued to it as well, with the coin bearing engraved markings of both denominations on its reverse face.

On the obverse of 1892 20 Francs/8 Florin Gold Coins, you’ll find the right-profile portrait of Emperor Franz Joseph I. Throughout his long reign over the Austro-Hungarian Empire as a dual monarchy, he held the titles of Emperor of Austria and King of Hungary. He was the third-longest reigning monarch in European history upon his death in 1916. This portrait captures him with hits trademark bushy chops wearing a wreath crown. His name and title are engraved around the design field’s edge in Latin.

IF you have any questions about these gold coins for sale, please don’t hesitate to contact Silver.com. You can reach our customer service team on the phone at 888-989-7223, chat with us live online, or simply send us an email.