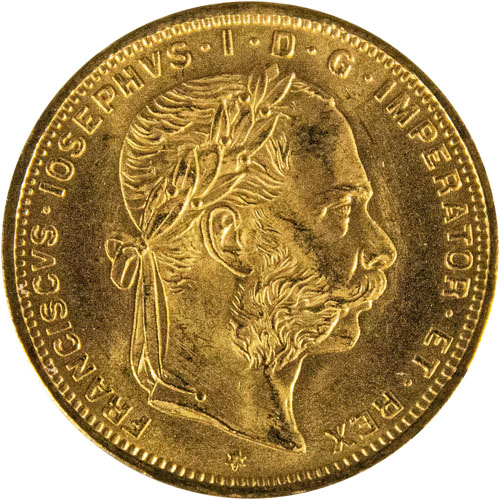 In the 19th century, the 20 Franc denomination dominated currency on the European continent. Based on the 20 Francs gold coin of France, introduced first during the reign of Emperor Napoleon Bonaparte, the coin would go on to form the backbone of the Latin Monetary Union. Today, 1892 Gold 20 Francs/8 Florin Austrian Coins are available to you online at Silver.com.

The Hapsburg Dynasty ruled much of Central Europe for hundreds of years, but the height of its power came during the late-19th century when the Austro-Hungarian Empire was formed. Franz Joseph became the first and only Emperor of the Austro-Hungarian Empire following the combination of the Empire of Austria and the Kingdom of Hungary. In 1892, the empire adopted the gold standard and began to issue coins of the 20 Franc denomination.

On the obverse of 1892 20 Francs/8 Florin Austrian Coins is an image of Emperor Franz Joseph I, Emperor of the Austro-Hungarian Empire. He is shown here in right-profile relief with a laurel wreath on his head. This design was one of the final images of Franz Joseph I to feature on Austrian gold coins.

The reverse side of 1892 Gold Austrian Coins features the coat of arms of the Austro-Hungarian Empire. The empire was formed when Emperor Franz Joseph I, then the Emperor of Austria, was also crowned the King of Hungary, pulling the Kingdom of Hungary into the empire.

Please contact Silver.com with any questions when you buy gold online. Our team is available to assist you at 888-989-7223, online using our live chat, and via our email address.