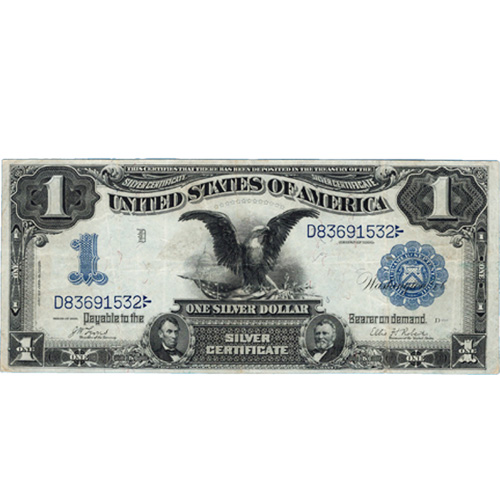 Silver Certificates were issued by the United States Treasury from 1878 to 1964, with the final redeemable year being 1968. For most of the history of the program, Silver Certificates were redeemable by the holder for the face value of the note in silver dollars. In the final year of acceptances, June 1967-June 1968, holders could redeem Silver Certificates for raw silver bullion. The series was introduced to quell the anger over the Fourth Coinage Act from 1873 that had ended the free coining of silver in the US and halted production of new silver dollars.

All of these 1899 $1 Black Eagle Silver Certificates are offered to you in Very Fine condition. Now more than 120 years old, these Silver Certificates have impressive crispness for their age and come with no visible, major flaws. You will notice folds, creases, and wrinkles from use in circulation and slight wear around the corners of the notes. Each one is otherwise in good visible condition and makes an excellent collector piece. The notes will ship inside plastic currency sleeves.

In the obverse design of the 1899 $1 Black Eagle Silver Certificate, the so-called Black Eagle design features as the prominent visual element. The bald eagle is shown with its wings spread out wide to its sides as its talons clutch a flagpole bearing an American flag. Beneath the eagle and flagpole are portraits of President Abraham Lincoln and President Ulysses S. Grant. The Black Eagle Silver Certificate remains the only note in American history to feature two former US Presidents on the same side and was the first to feature the images of two presidents on one note. The only other to feature two presidents is the modern $2 Federal Reserve Note, though Presidents John Adams and Thomas Jefferson are found on different sides of the note.

For the reverse field of 1899 Black Eagle Silver Certificates, the design element retains a simple elegance. With an ornate border around the field, the note has printed notations of the face value in both numeric and written text, as well as notations indicating the series of issue and the nation of issue.

Please contact Silver.com with your questions. You can call us at 888-989-7223, chat with us live online, or simply send us an email.