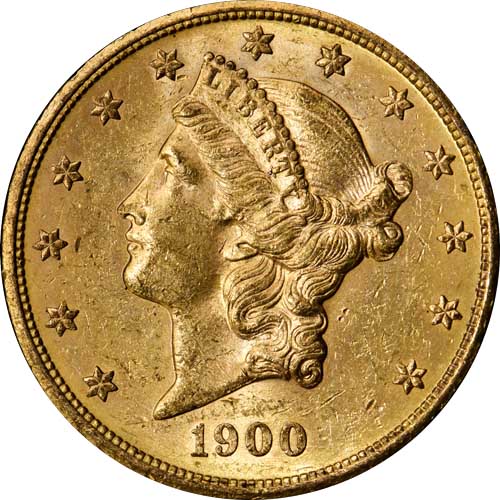 The gold coins of the US Eagle Series were in production at the United States Mint from 1795 to 1933. However, the most stable of the four denominations was the primary $10 US Eagle. The Half Eagle and Quarter Eagle saw more intermittent coining during the nearly 140-year history of the series. The Gold Double Eagle was not introduced until 1850 and was likewise canceled in 1933 along with the other denominations. Turn of the century specimens in this series mark the final years of classic coin designs in the United States before a modern overhaul of coinage occurred in the 1910s. Today, 1900 Pre-33 Gold $20 Liberty Double Eagles from the turn-of-the-century period are available to you online at Silver.com.

Throughout the 57-year history of the Liberty Head Double Eagle design series, the United States Mint issued the coins at five of its branch facilities. The Philadelphia Mint was the one branch facility to issue the coins each year throughout the program. Early on, the New Orleans Mint issued batches of the coins, with the 1854-1856 New Orleans issues some of the rarest available in the 21st century as very few specimens survive today. The San Francisco Mint, Carson City Mint, and Denver Mint also issued the coins. In the case of New Orleans, San Francisco, Carson City, and Denver coins, you will find mint marks on the reverse beneath the tail feathers of the eagle. Philadelphia Mint coins never have mint marks.

All of these 1900 Pre-33 Gold $20 Liberty Double Eagles are available to you in About Uncirculated condition, or better. Coins in this condition have most or all of the original mint luster still present. In terms of wear and tear, AU+ coins have light or trace signs of wear present only on the highest elements of the design and surface areas. The coins will ship inside protective plastic flips and represent the turn-of-the-century issue of the Gold Double Eagles.

On the obverse of 1900 Gold $20 Liberty Double Eagles is Lady Liberty. This classic Liberty Head design was modified for the Gold Double Eagles in 1849 by James B. Longacre, then serving as the 4th Chief Engraver of the United States Mint. Longacre modified this Liberty Head image from Christian Gobrecht’s original 1838 design that had been in use already on the Eagle, Half Eagle, and Quarter Eagle.

The reverse side of 1900 Pre-33 $20 Liberty Double Eagles comes with a unique depiction of the heraldic eagle of the United States. Based on the Great Seal of the United States, it shows a front-facing eagle supporting the US national shield. The bird clutches the arrows of war in one talon and the olive branch of peace in the other. In 1866, the US Mint added the national motto to this side of the coin within the ring of 13 stars over the eagle’s head.

Please contact Silver.com if you have any questions when buying gold. You can call us at 888-989-7223, chat with us live online, or email us directly.