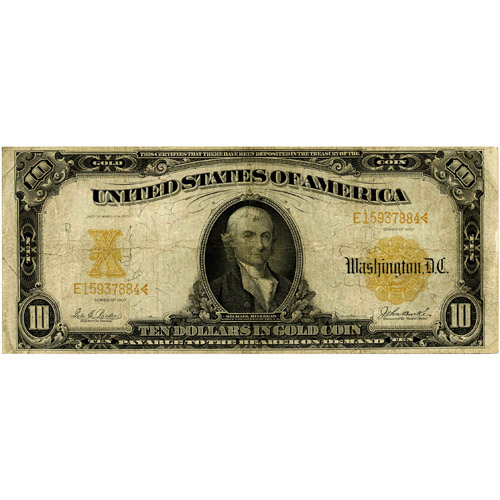 For the obverse design of 1907-1922 $10 Gold Certificates, a portrait of Michael Hillegas features at the center. The 1907 Series and 1922 Series $10 Gold Certificates both feature this portrait with yellow-gold ink on the US Treasury seal, serial numbers, and the Roman numeral X on this face. The distinguishing element between the two is the presence of an inscription over the X on this side that reads: THIS CERTIFICATE IS A LEGAL TENDER IN THE AMOUNT THEREOF IN PAYMENT OF ALL DEBTS AND DUES PUBLIC AND PRIVATE. ACT OF MARCH 14, 1900. AS AMENDED ANDDECEMBER 24, 1919.

On the reverse of the 1907-1922 $10 Gold Certificate is a depiction of the heraldic eagle at the center of a sunshine element at the bottom of the design field. The numeric denomination is set in all four corners, with the nation of issue and face value above the heraldic eagle. The back of US Gold Certificates featured orange ink throughout and gave rise to the use of the terms yellow boys and goldbacks to refer to the notes.

1907-1922 $10 Gold Certificates listed here are available in Fine+ condition. Notes in this condition have considerable evidence of handling that includes rounded corners and margin splits. Please keep in mind that the series versions and signatures on the notes could match if you buy several.