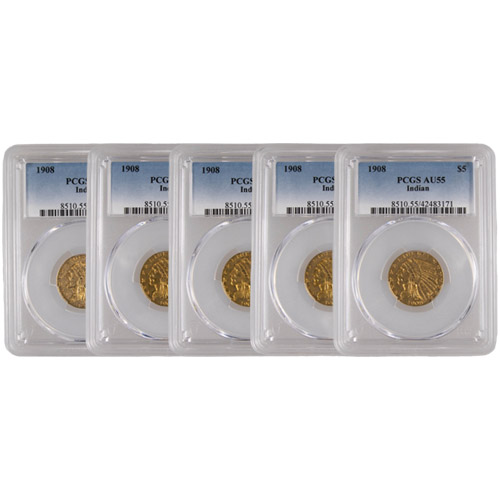 The gold coins of the US Eagle denomination were issued by the United States Mint from 1795 to either 1929 or 1933, depending on the denomination. The Half Eagle was the $5 denomination in this series and was last issued by the US Mint in 1929, nearly 15 years after its annual production ended at the start of World War I. The final design in this series was known as the Gold Indian Half Eagle. Now, 1908 Pre-33 Gold $5 Indian Half Eagle Coins are available in a 5-Coin Set for you to purchase online at Silver.com in AU55 condition.

The Indian Half Eagle was one of five designs used on the $5 Half Eagle gold coins from the United States Mint. The coins were struck from 1908 to 1914 and again for one final time in 1929. The coins were suspended during World War I and not authorized for return until 1929, which ended the series four years before the end of all gold coining in the US in 1933.

On the reverse field of the gold coins in the Pre-33 Gold $5 Indian Half Eagle 5-Coin Set is an image of the American bald eagle. The bald eagle is shown in left-profile relief with its wings resting at its sides as it sits perched on a sheaf of arrows wrapped in an olive branch.

These 1908 Pre-33 Gold $5 Indian Half Eagle 5-Coin Sets come with individual slabs for each coin and grades of AU55. The About Uncirculated 55 grade indicates coins with medium or near-full mint luster, and extremely light or only trace wear or friction on the highest points of the coin.

Silver.com customer service is available to assist you at 888-989-7223. Our team can also assist you online through our live chat and email address features.